Welcome to the first of our regular instalments of “But Can It Beat a Suicider?” where we look at some of our favourite units, examine their strengths and weaknesses and then ask the most important question…

Now in my force, Suiciders are not just the wisest of all Super Mutants (though they rarely get to express their thoughts verbally so that aspect of their persona is often missed), they are my favourite unit and can be loads of fun, especially when used in numbers. They can also be used as the yardstick by which we measure toughness of other units. If an enemy can survive a Suicider, it is to be reckoned with indeed! 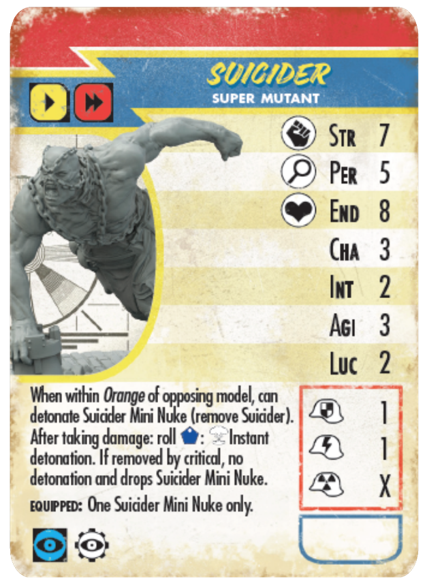 We will see how various enemy units stack up, then perform the ultimate test against a Suicider - the Council of Suiciders will give a score to the enemy model as well as some choice words of wisdom.

My first victim guest is stream veteran Charlie Perkins. He is currently playing a Wasteland Creatures force in our Dev Team campaign. Let’s see what we get to explode today!

CP: It’s such an honor to be here, and to be the first test subject of this insane experiment. I’ve brought a few of my favourite units today, from the best faction in the Wasteland; Creatures. These adorable critters have faced nukes before and only grown stronger from it, so I’m sure they can handle one more! Prepare yourself to see just how tough the true denizens of the wasteland can be. 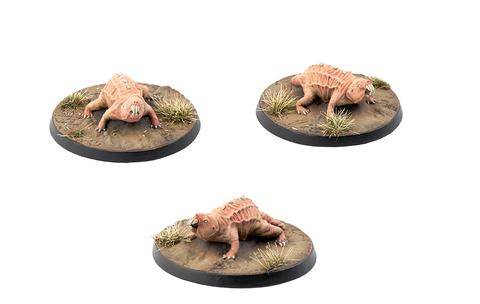 Charlie’s First Choice: Molerat
CP: These cute little monstrosities might be small, but they’re deadly. Not only can they deliver a nasty bite, but they’re one of the best in the wasteland at setting an ambush. They have a special trait that means their charge becomes a burrow, tunnelling deep underground and popping up right next to their target, without even needing line of sight. This one is the strongest of the molerats my force has to offer, and I’m sure he’ll stand up to the tiny explosion heading his way.

JE: Molerats literally cannot survive. Turns out we can put as many Molerats as fit within yellow and they would all die. They need better motivation. Clearly they must be too reliant on their Creature Comforts.

Molerats do need to be used in numbers, I would imagine in a real game, enough of them could hamper suiciders and prevent them getting to the real targets. Not every model in a game needs to “Make it's points back” to be worth taking.

CP:  Less than impressive but not entirely unexpected. Molerats aren’t made to take a hit and should avoid damage as much as they can. That being said, they are by no means useless. Their sheer numbers combined with their ambush means they can harass the back lines of a force, burrowing underneath the tanky front lines to swarm over the squishier units in the rear. They’ll struggle to win in a fair fight against front line troops, but fighting fair isn’t something these creatures care about. 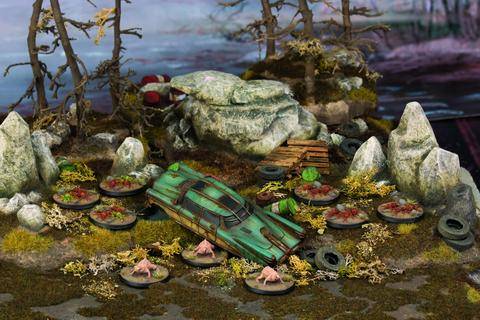 CP: I’ve learned what the problem was with that last one. That Molerat had survived a nuke before, hadn’t fully accepted the warm glow of radiation into its life. That's why my next creature choice is a brighter prospect. The creepiest of the crawlies that doubles as a radioactive nightlight, I’ve brought a Glowing Radroach Swarm. These glowing variants are tougher and more dangerous than their regular counterparts, and able to dish out multiple radioactive attacks each turn. If anything is going to survive a nuke, it’s a roach.

JE:  I’m not too worried here. Charlie’s Radroaches are deadly in numbers and with a controller but one of them shouldn’t be too much of an issue. At just 40 Caps they are easy to field in decent numbers and their attacks are something you have to take notice of –   unless you have a Mini Nuke and don’t care about getting hit! I’m just happy the Mini Nuke is physical damage not Rad.

JE:  I was worried for a moment but the Glowing Radroach had no tenacity and couldn’t be relied on to keep going in the long term. He survives enough to make you worry but not enough to keep you worried.

It's actually possible for these to survive and they are hardly the best target for a Suicider. In a real battle, these could both be a threat to the Super Mutants and prevent any models from reaching your more valuable models.

CP:  At first glance a Glowing Radroach Swarm can be a little underwhelming. They don’t have a huge amount of health and negligible armour, and lack the burrow of the molerat. However, overlooking these irradiated insects can be the downfall of an enemy force. One of these swarms can almost incapacitate a model with low radiation resistance, with the potential to attack twice in a single action with a strong radiation attack. Additionally, once defeated they still pump out radiation damage around them until the end of a turn, becoming a biological mine. These can stop a charging frontline and hold them back for a few turns, or they can focus on vulnerable enemies to irradiate them out of the game. A truly variable unit, and a bunch of good bugs. 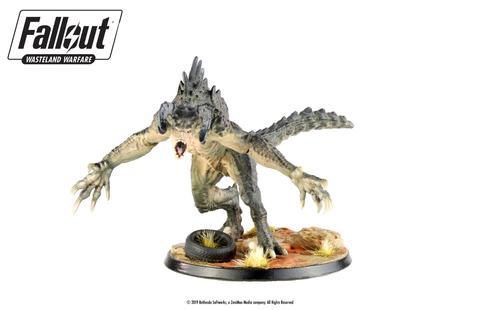 CP:   All right, playtime’s over. My swarming favourites don’t seem to be doing so well, so I’m bringing something a little tougher to the table. Next up, a walking organic tank of genetically enhanced fury; it’s the Deathclaw. These beauties are tougher than nails and some of the fiercest melee fighters around, able to tear into enemies with their sharp claws and throw them around the battlefield. They can take some serious damage, and dish out some punishment of their own. Bring it on!

JE:  Ooh, this one’s a big boy! He’s taller than a suicider and in Super Mutant society height means a lot (When they all sit around and discuss philosophy, my Suiciders often speculate that height is in fact the currency of their society… E.g. “Give me your stuff because I am bigger than you”). Bearing this in mind I am wondering how well my little Mini Nuke will do here.

Wow! It actually takes 3 Suiciders to kill just one Deathclaw.

This is where you need to do damage so sending your best models in is important. The Deathclaw can make short work of your top models so getting some early hits in is essential. The Mini Nukes can help finish off a damaged model or reduce a tough model to more manageable remaining wounds.

CP: One of the most iconic and most dangerous creatures, these mutated weapons of mass destruction leave a trail of destruction in their wake. They’re expensive, but their high health and armour means they can stick around for a long time while dishing out monstrous amounts of damage. Although vulnerable to being focus fired from a distance, they can shrug off a few shots and charge into the fray. Their additional attack, Deathclaw Crush, allows them to throw enemies around like toys, making them perfect for disrupting formations and clearing strong enemies off objectives. Truly a terror of the wastes, a good Deathclaw companion will never let you down.

Final Thoughts from the Suicider Council:

Some creatures are tough. Some are not worth exploding on. You really have to work to get the best out of your Mini Nuke, on a valuable target and not swarmed by Rad Roaches or Molerats. Don’t worry if it doesn’t kill everything, getting that huge damage on a couple of tough models will help the rest of your guys finish them off.

Against Wasteland Creatures Suiciders are likely a second wave, let them jam your melee models with their chaff and run past with the Suiciders into the big targets you need to deal with.

CP: Suiciders are truly a force to be reckoned with, but they have their counters. While they can make an entire swarm disappear in the blink of an eye, Creatures can really make them struggle to get their proper value. The first option is to tear them apart with one of your stronger units, taking the hit but remembering that some creatures can regenerate lost health. The slightly more upsetting method is to sacrifice a weaker unit to the blast. Losing 18 caps worth of a molerat to remove 55 caps of explosive damage from an enemy force is an amazing trade, so spreading out your weaker units can leave a Suicider confused and useless. Still though, a very good tactic is to run away from the angry brute holding a nuke. Even Creatures realise that.

By Jason Enos and Charlie Perkins

Test out Super Mutant Suiciders yourself, you can buy them here.