Every person, creature, robot (and alien) in the Fallout: Wasteland Warfare miniatures game is represented by a Unit card which shows their S.P.E.C.I.A.L. attributes, skills, movement distances, armor ratings, abilities, etc. In the RPG, players can create their own characters and the first step is to choose one of the 16 starting character profiles which are just like Unit cards (but called Character cards). These set a character’s starting S.P.E.C.I.A.L. attribute values, which skills are associated with attributes, and other details. The starting character profiles cover a wide variety of basic types from a Forager to a Fixer, from a Handyman to a Sniper, from a Pilot to a Thug. There are a couple of Super Mutants and a Mr Handy to pick from too. The starting character profile cards shows all the details you would expect on a Unit card, plus each profile also gives some free skills they start with too.

Next, the player creates their character’s back story. The character profiles are not for specific factions so players have freedom to create their own story - after all, we all want to tell and experience out own stories in the Wasteland, plus Fallout is full of exceptions too such as Super Mutants that work alongside settlers, synths working against the Institute, etc.

Finally, the player receives some experience points (XP) to spend on skills and Perks. Perks from the miniatures game can be used, plus there are some new ones specifically for the RPG which cover areas not required in the miniatures game like Aquaboy/Aquagirl which allows a character to hold their breath underwater and not take radiation damage from swimming.

During play, characters gain XP which they can use to develop their character further by buying skills, specialities and/or Perks. Some Perks increase attribute values which can be purchased multiple times, though these get increasingly expensive.

Why can’t a player start with a blank character?
The reason for this is that the values of the attributes, which skills a character starts with and which attributes those skills are attached to needs careful crafting to ensure each character has strengths and weaknesses. A core design principle in Fallout: Wasteland Warfare is that nothing and no-one is great at everything. Additionally, this is important so that characters created in the RPG can be used in the wargame without causing major balancing issues. Also, it makes it quicker to get started too and requires fewer rules. Of course, a player could create a character with any attributes, skills and details they want with the GM’s approval.

Models in the miniatures game can die quite easily. Will the RPG be quite deadly?
As the weapons in the RPG and wargame use the same cards and details, they do the same amount of damage and armor gives the same protection. However, surviving an RPG scenario requires more endurance than lasting one 6-round scenario in the miniatures game, so there are a few factors to aid a character’s life-expectancy in the RPG. One is that a character that is reduced to zero Health is incapacitated rather than immediately dead – the GM will decide on what their fate is at the end of the current scene based on the damage taken, situation, etc. (so be nice to your GM...). Also, in addition to Stimpaks, food and drink that can restore lost health, characters can also rest to restore some Health too. Finally, characters have a minimum amount of Health regardless of the value of the attribute next to their Health icon so many start with a bit more Health than in the miniatures game. Still, having some decent armor certainly wouldn’t be a bad idea either...

Can player characters be Heroic?
By default, all player characters are Heroic as they have V.A.T.S., can use Luck, Criticals and have some Action Point Use Icons too. The icons showing this are all incorporated onto the character mat (similar to tucking a Heroic card under the top of a Unit card in the miniatures game).

Can a player play a character from the miniatures game?
Yes. With the GM’s agreement, a player can use any Unit card from the wargame as their character card. The GM and player agree any skills, Perks, Gains and Scars so the character is the right level of experience/ability to match the scenario and the other players.

Does the GM use the Unit/Character cards?
Yes. The Unit cards from the miniatures game are really useful reference for NPCs. Need a band of Super Mutants? Grab the Super Mutant card, plus a weapon card or two, and you’re ready to go. The GM also has the option to apply some simple filters to a Unit card to make it a major, regular or minor NPCs. After all, the life of a GM is demanding enough so (like the miniatures game) we want the F:WW RPG to make the bookkeeping as simple and quick as possible so they can focus on the story.

Overall, character creation is simple so players can get playing quickly but offers way to develop your character in any direction you wish.


Next time, we’ll look at some of the other areas in the RPG that are new for Fallout: Wasteland Warfare. Until next time, happy wandering in the Wasteland.

​You can pre-order the Fallout: Wasteland Warfare RPG Expansion here. 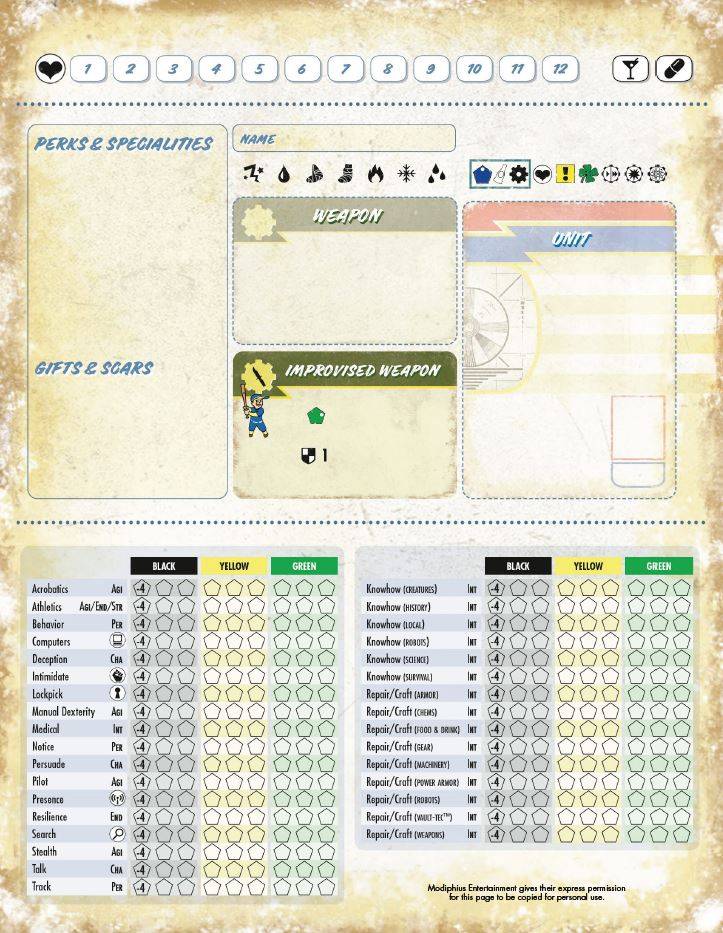