9th March 2018. I asked James to elaborate more on the AI system for Fallout: Wasteland Warfare, something I know a lot of you have been waiting on. This has been one of the features I've been particularly interested in seeing developed and I know many miniatures gamers don't often get to play with their groups as much as they'd like. Additionally the idea of being able to play a miniatures game co-op with friends is really exciting and I love the fact I could combine my Brotherhood force with your Survivors and we pool our Super Mutants for an epic game! I'm really glad we managed to build this in to the two player core box as I think that means it's a fantastic package for anyone to start gaming with miniatures.

Here's a quick preview of the Red Rocket Scenic box set on the right and the actual dice in our lovely new 'silent rolling' dice tray for the planned play through videos :-)

One of the interesting ways to play Fallout: Wasteland Warfare is to play against the Wasteland itself whether solo or co-operatively with another player. Any game with solo/co-op play requires rules to determine the actions of the opposing models - an artificial intelligence (AI). As I mentioned in previous articles, Fallout is about more than just combat as players need to find items, lockpick, reach specific locations, use computers, etc. and it was important that playing against the AI could perform these actions too. My ultimate goal was to create an AI that could substitute for another player as much as possible and play the same scenarios. As a result, there were three aspects that the AI system needed to deliver: first, it needed to be able to perform the non-combat actions in a meaningful way (not just charge in and fight); second, the AI needed to have awareness of the player’s, and its own, models and goals; and, third, each type of model needed its actions to be influenced by their own personality - a Super Mutant may charge into close combat, but a Field Scribe would be more likely to hang back and pick targets more suitable to its capabilities. Of course, all this needed to be simple to use too.

Objectives
One of the first important elements for the AI system is the Objective. Each scenario that involves AI has an objective for the AI models. This could be to remove a specific player model, obtain an item, reach a specific location, etc. These objectives can change during the game too as the AI responds to the action. For example, one AI scenario has the AI coming to steal an item and you need to stop them - the AI’s first objective is to go to the item and grab it. Once one of the AI models has the item, their objective changes: the AI model carrying the item’s objective is to leave the battlefield, and the objective of all the other AI models is to defend the model with the item.

Responses
So, how does the AI decide what to do? Each unit comes with its own AI card which shows a small grid that controls the its behaviour. When an AI model is to act, you roll one of the game’s blue special effect dice and the icon rolled determines which of the 3 rows on the grid to use. The icons on the special effect dice are not evenly weighted making some AI responses more likely than others, which is great for adding some personality but with some uncertainty too. Then, you check the column that matches the model’s Situation. In many cases, Situation is determined by the model’s Health; for example, as some models get damaged they are more likely to focus on the objective before they get taken out; whereas, others get more vengeful as they take damage so focus less on the objective and more on taking out the player’s models. Some models use factors other than Health to judge their Situation; for example, a Field Scribe checks how many friendly models are nearby (as they are more bold when they feel they have back-up), whilst Dogmeat is more aggressive when near a model like Sole Survivor who has the Dog Handler ability. As each grid has only a maximum of 3 columns, they are simple and quick to check.

The combination of dice roll and Situation determine one cell on the grid and this determines which response the model will carry out. The AI system uses 5 general responses - Attack, Move, FallBack, Defend, and Objective. These are the heart of the AI system and are the same for all AI models.

·       Attack means the model will attack based on its own list of target priorities - each model has a list of up to 3 factors it uses to narrow down the available targets such as the model with the least armour, most damage, highest maximum health, nearest, etc. If a model can not attack then it will move to be able to attack.

·       Move means, unsurprisingly, the AI model moves towards the objective but it does not engage in combat.

·       Fall Back is similar to Move but moves a model back to where it entered battle.

·       Defend was a very interesting and challenging one to create as the AI needs to assess what danger whatever it is trying to defend is in and how it can best help. I’ll explain this using the example of a Knight defending a prisoner they are escorting. When the Knight performs the Defend response, it assesses what it would attack if it was in the prisoner’s position but using the Knight’s own criteria - that gives the Knight its target. If the Knight can use its actions to attack this target, it does; if not, it moves towards the prisoner so it can be close-by. Not only does this allow the Knight to play to its strengths, it also means the Knight will move with the prisoner when needed too.

·       Objective directs the AI model to carry out one of the other 4 responses which matches the objective but with a very specific target, i.e. attack but only the leader.


Personalities
I mentioned all models use the same 5 responses depending on their grid but every response is influenced by the personality of the model performing it too. One of these traits is whether the AI model performs their response recklessly or not - if the response’s cell on the grid is shaded it means it will act recklessly; for example, a Paladin in Power Armor is more likely to move straight across the open disregarding cover compared to a Field Scribe who will balance progress with safety. Reckless models will shoot into close combat (which could hit their team mate) but models being careful will not. As being reckless or not is determined by the specific cell on each grid, it means each AI has its own approach; for example, a Super Mutant Brute gets enraged as it takes damage so becomes more reckless the more injured it becomes; whereas, a Paladin in Power Armor starts reckless (because, let’s face it, Power Armor is super tough) but gets less reckless as it takes damage so it can try to finish the job it was assigned.

Another personality factor is whether a model stays engaged in close combat or not. Leaving close combat gives the opponent a free attack, but this is often a valid and important choice because getting the battle’s objective done is the key to victory. If an AI model’s response on the grid is underlined, it means it will remain engaged and keep fighting regardless of what response it was set. Like recklessness, this is determined by the specific grid cell so delivers a lot of behavioural variety. For example, a Paladin remains engaged when attacking but will always breakaway if its response is Objective and needs to be elsewhere; whereas, Piper remains engaged when she is healthy (and feels pretty reckless) but withdraws from being engaged more if she has taken damage as she prefers to shoot.


One other personality trait is that an AI model with a ranged weapon which is close enough to an enemy has the choice when attacking of either charging into close combat, or using the ranged weapon. Small icons on the right of each grid row (based on the icon(s) rolled on the special effect dice) determines which of these it performs. A Brotherhood of Steel Lancer (which has great rifle skill) is more likely to shoot; whereas, a Super Mutant is more likely to charge in and use their Board rather than shoot with their Bolt-Action Pipe Rifle.


Overall
Creating the AI system for Fallout: Wasteland Warfare was a very interesting design challenge and I am pleased it packs a lot of personality into a small grid whilst using simple rules that work across all the AI models. The flexible AI system can deliver many personalities which play to their strengths and alter during a battle, but without total certainty too. At one end of the spectrum a Mutant Hound always attacks recklessly and remains engaged; whereas, the Alien is careful and very skittish so tends to fall back when outnumbered and only attempts the objective when no-one else is nearby.


The core box comes with 5 AI scenarios so you can dive in straight away, but making your own AI scenarios is easy too as you just need to set the AI’s objective. You can also play any of the other included and planned scenarios using the AI system. As every model comes with a matching AI card, you can use any model you own for the AI so you can attack a group of Survivors as they escort a Brahmin convoy, race against the Brotherhood as you try to hack the computers, free as many captives as possible before the Super Mutants take out your leader, or just head into the Wasteland where all the creatures and robots have no co-ordinated plan but will respond to your presence. You can even use the AI system to add to player-versus-player games by including some AI-controlled models to a battle, such as a Deathclaw roaming the area. Each expansions will include both unit cards and AI cards so every time you expand your collection you're adding to your potential AI forces and options - just like with the narrative system.

We'll be diving back deeper in to Narrative and Settlement systems in the next update. 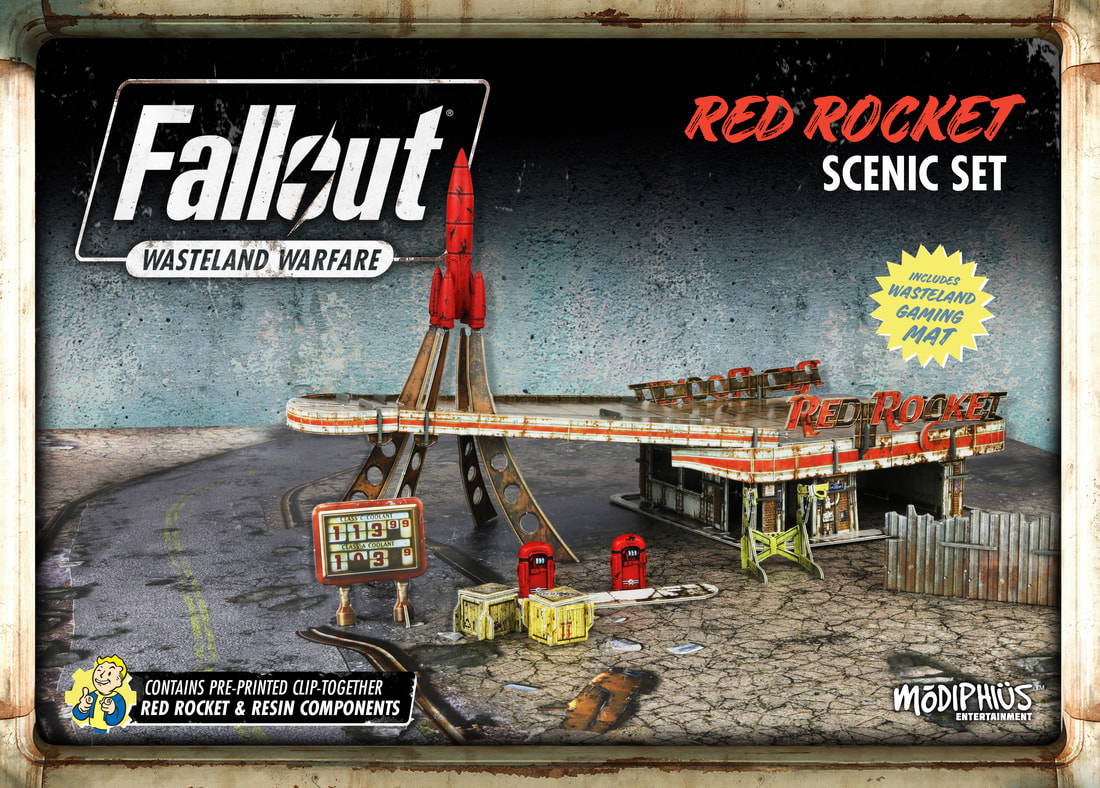 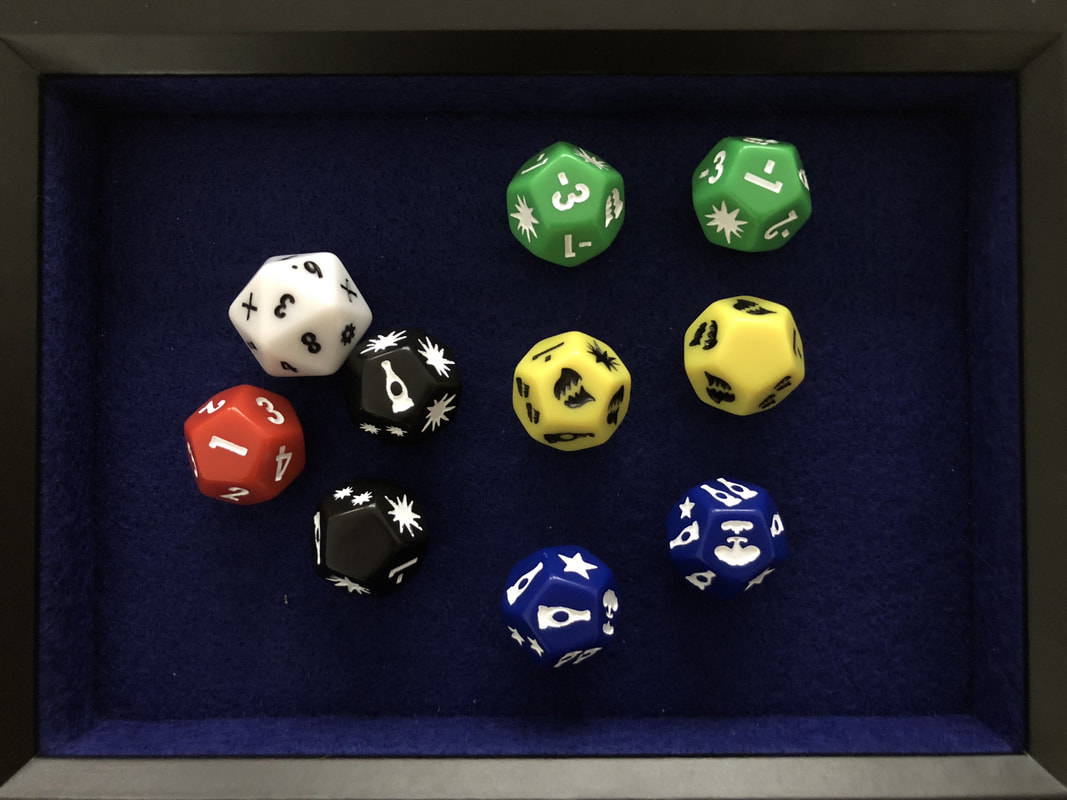 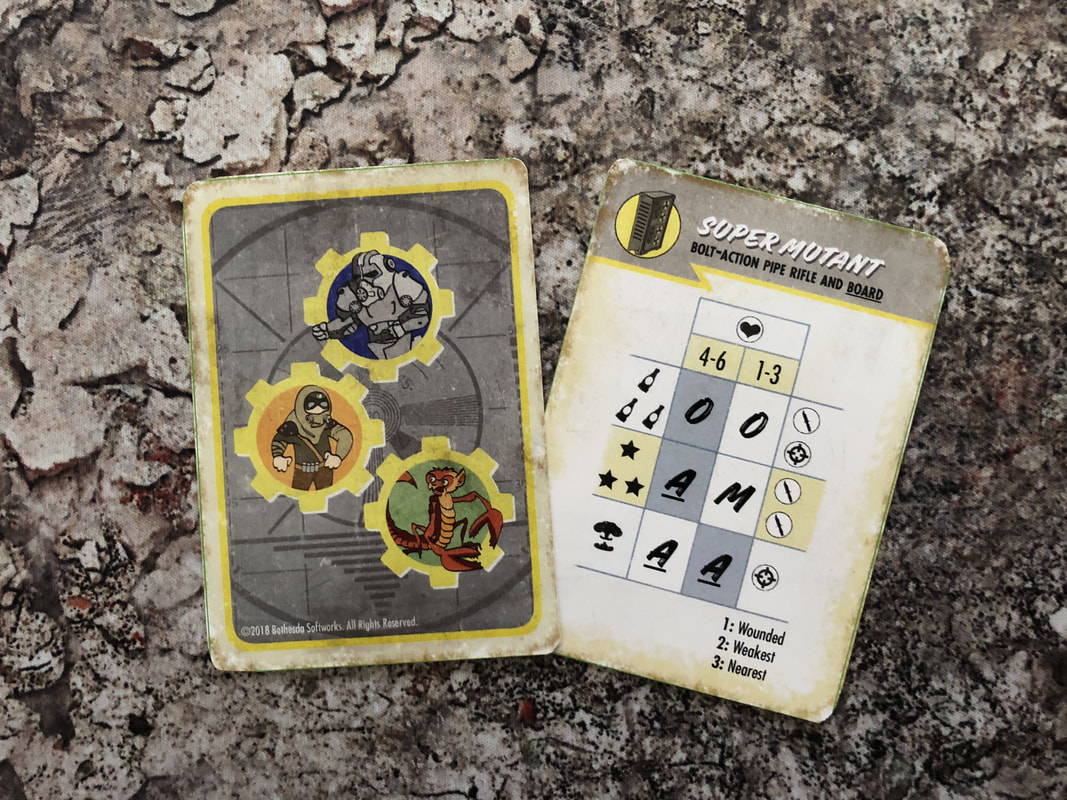 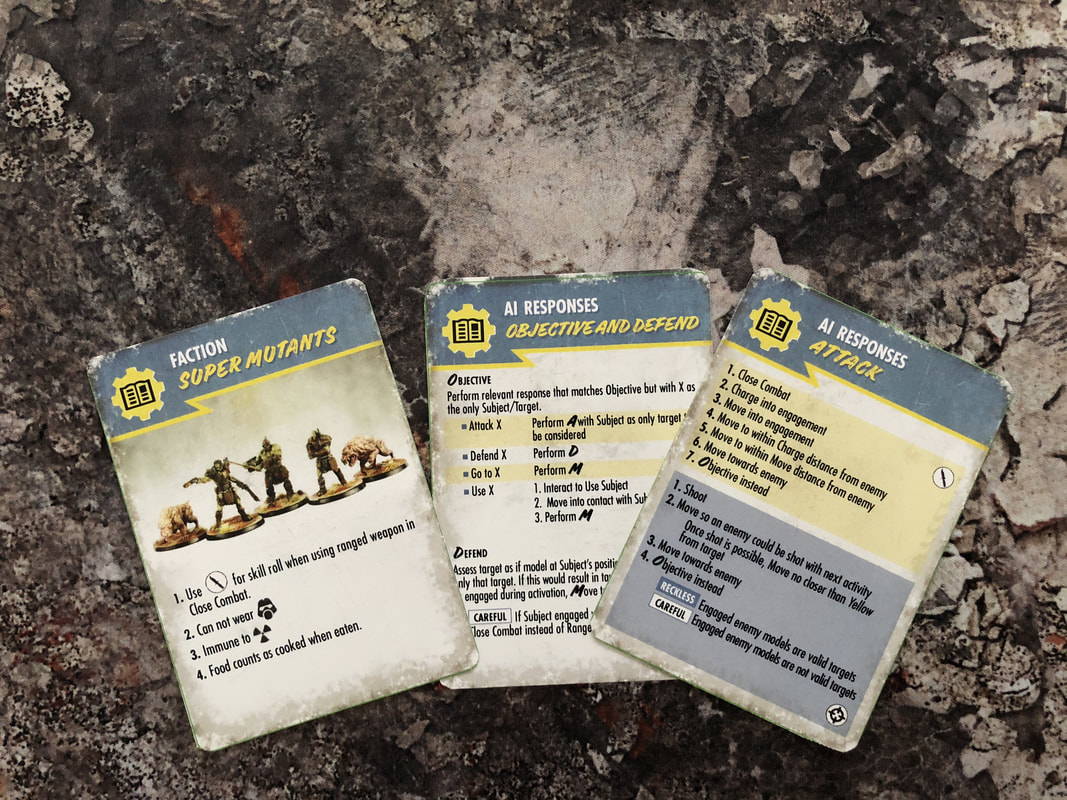