Showdown in Synthtown has been designed to be a fun and challenging introduction to one of the most mysterious faction in Fallout: Wasteland Warfare; The Institute. A faction that it has remained hidden for so long that it is almost mythical, the Institute is a powerful centre of technology in the wasteland. They use their advanced synthetic robots, or Synths, to control and explore the surface. They dispatch these troops from the safety of their deep underground sanctuary base. accessible only with the teleportation technology that they jealously guard. We had a lot of fun making these scenarios, as the high levels of technology used by the Institute let us implement new and exciting game mechanics to fit with the feel of the faction. 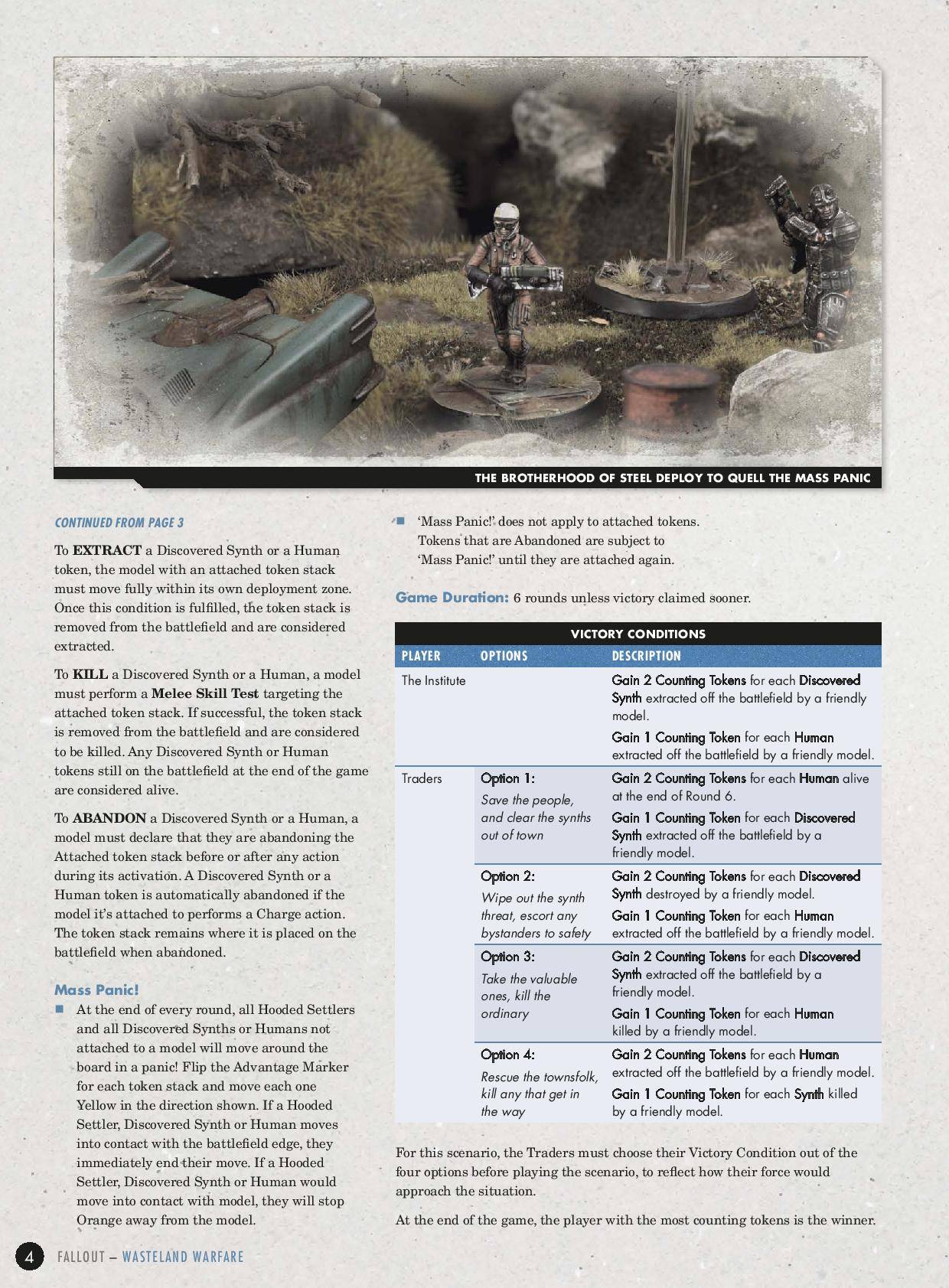 The first scenario, Invisible Amongst Us, shows the Institute reclaiming runaway synths. Combining this with the idea that they also abduct denizens of the wasteland to replace with synthetic doppelgangers, the idea of a hide and seek manhunt couldn’t be passed up. There were a few various iterations, trying to get the feel of the search right; in the very beginning it was set in a town that could have come straight out of the wild west… The most interesting part of this scenario for us is the fact that the Trader player can choose their own victory conditions. Residents in the Wasteland can have very different views to the same situation, and evidence of the Institute can make some flee and some enter a deadly rage. Giving the player the choice to decide what kind of party they are controlling, regardless of faction, lets them really carve out their own narrative and tell the story that they want to tell. The Institute only have one option of victory conditions so players unfamiliar with them can learn their motives and playstyle. 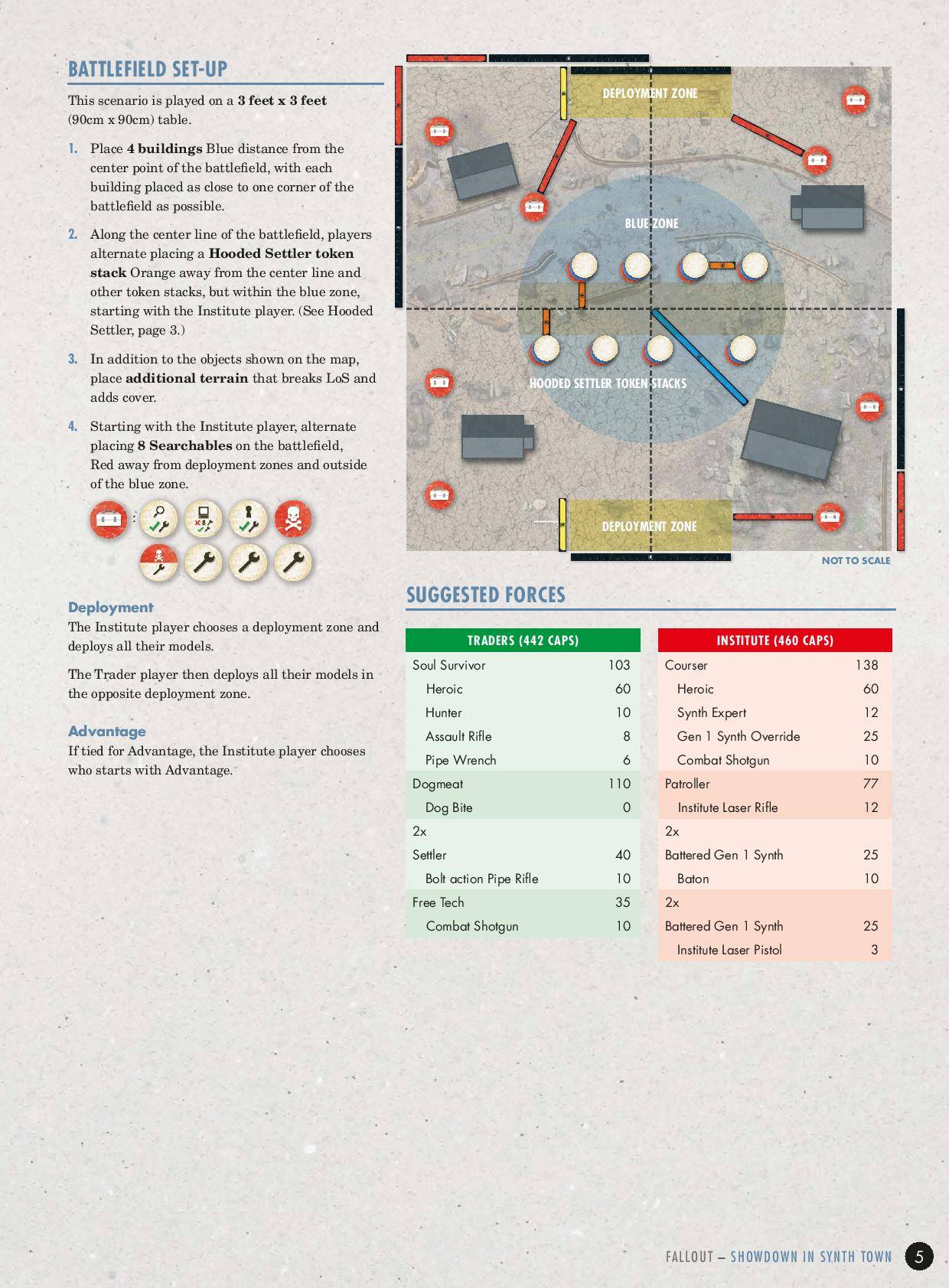 The Road Less Travelled is an ‘Escort the Payload’ mission, with an extra wasteland twist. Rather than simply defending the caravan against a wave of encroaching enemies, having defenders be picked off and abducted one by one gives an extra sense of danger and urgency to the task. Do you spread your models to fight back the wave of synths, knowing that some might disappear into the hoard, or do you hold everyone around the caravan but let the enemy into the control zone, potentially slowing the caravan down? Both players benefit in this one from having a high number of models to swarm/defend and try to overwhelm their foe, but a concentrated force with the right loadout could be just as effective at carving a path to their objective. One idea was to throw a piece of string or a shoelace onto the battlefield and have that be the line that the caravan would take. We realised we couldn’t rely on people unlacing their shoes every time they wanted to play, but if you want an additional challenge then the idea is yours to play with! 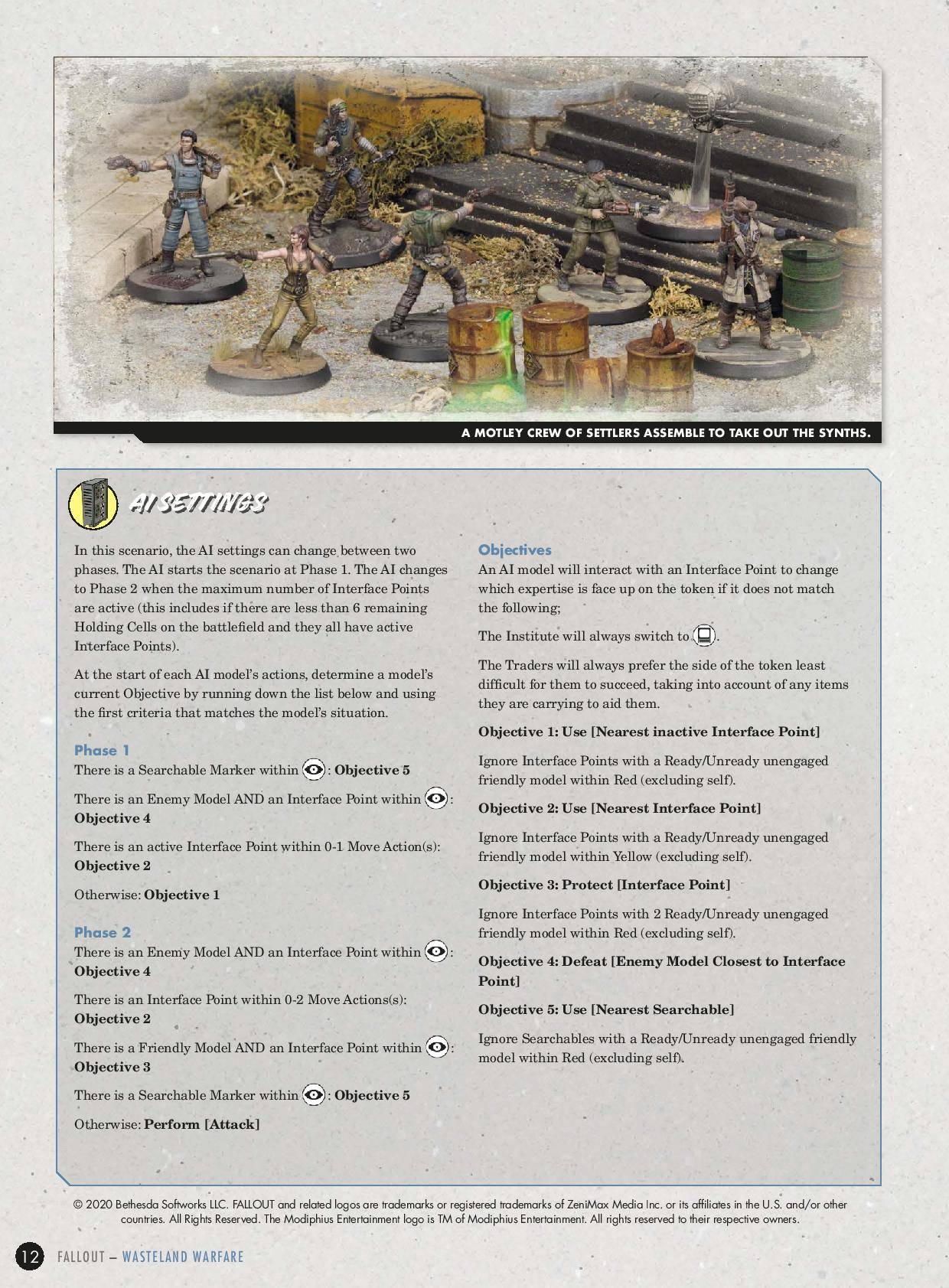 The grand finale of the scenario pack, Molecular Meltdown is a chaotic clash in the high tech setting of an Institute outpost. Originally the traders would be attacking the fortified base and the Institute would be defending, but the scenario evolved into something where the two sides are mirroring each other with opposite goals. We really enjoyed this idea that each side would have a goal, but failing spectacularly at their goal would be achieving the enemies goal. Another great feature of this scenario is the battlefield itself. Cover in the form of rooms can disappear dependent on which choices each player makes. 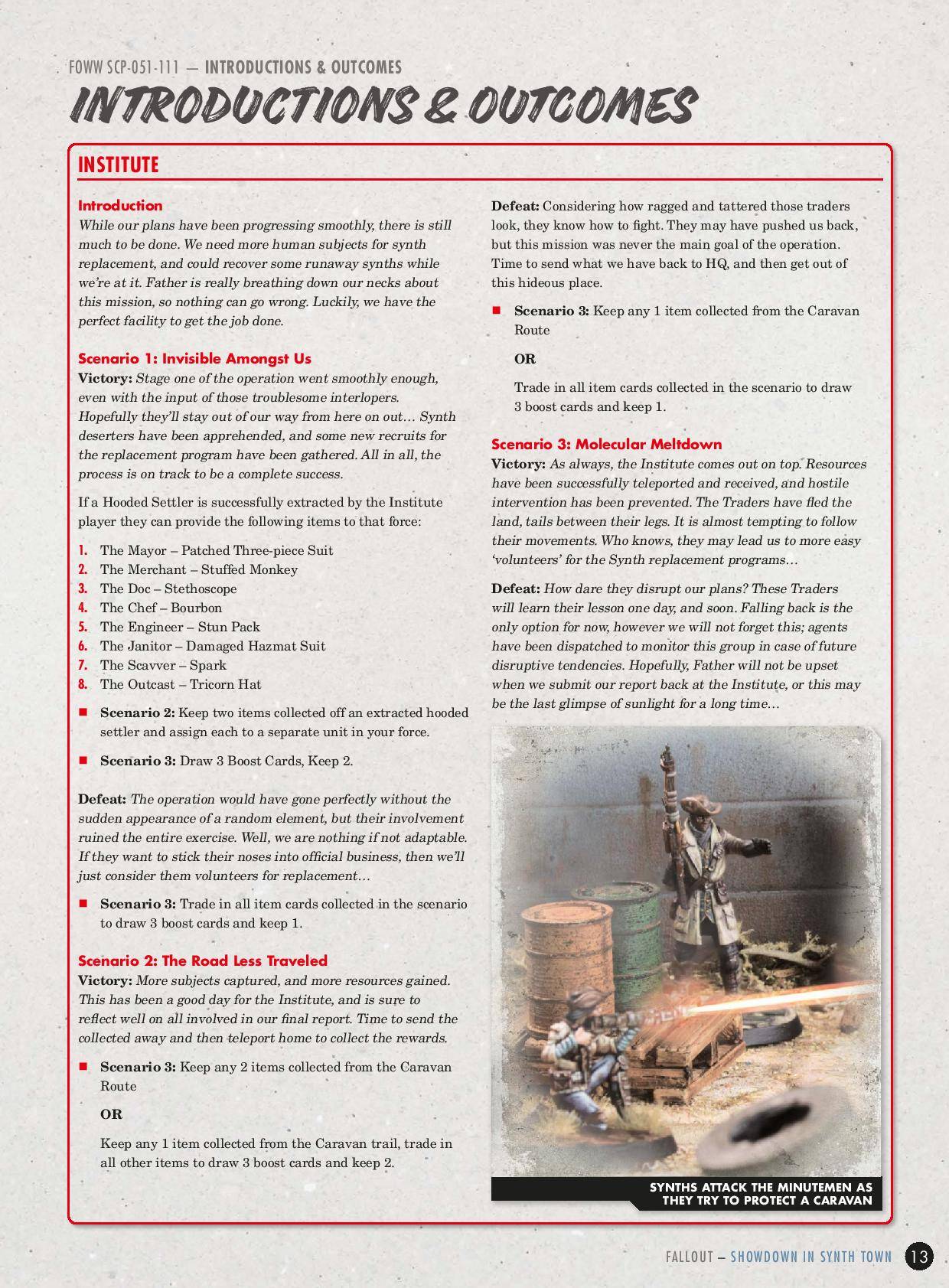 A cowering unit could suddenly be out in the open, and a sniper could suddenly have a clear shot through an area that was blocked only moments ago. This means that every time the scenario is played, the battlefield will evolve in a different way. It’s hard to come up with tactics for a scenario that has such varying features, but the more control you have over the rooms means the more control over the battlefield itself. Taking multiple models with high Use Expertise skills could allow you to sculpt the area into a perfect killing zone for your other troops, while models that are focused on combat could be a players downfall as they achieve the opposite of what was attempted.

We really hope you enjoy this narrative adventure in the Wasteland! We look forward to hearing about the many great adventures playing as (or against) the Institute in the future.

You can download Showdown in Synthtown now for free here.