Vampire: The Masquerade is probably my favourite role-playing game. The 5th edition features a massive re-imagining of the rules and the lore; a necessary evolution, that takes the game to the present. However, adapting from the old system can be a challenge for some veteran players. Furthermore, new players — particularly those who are new to role playing games — may find the task of creating a Chronicle from scratch pretty daunting. 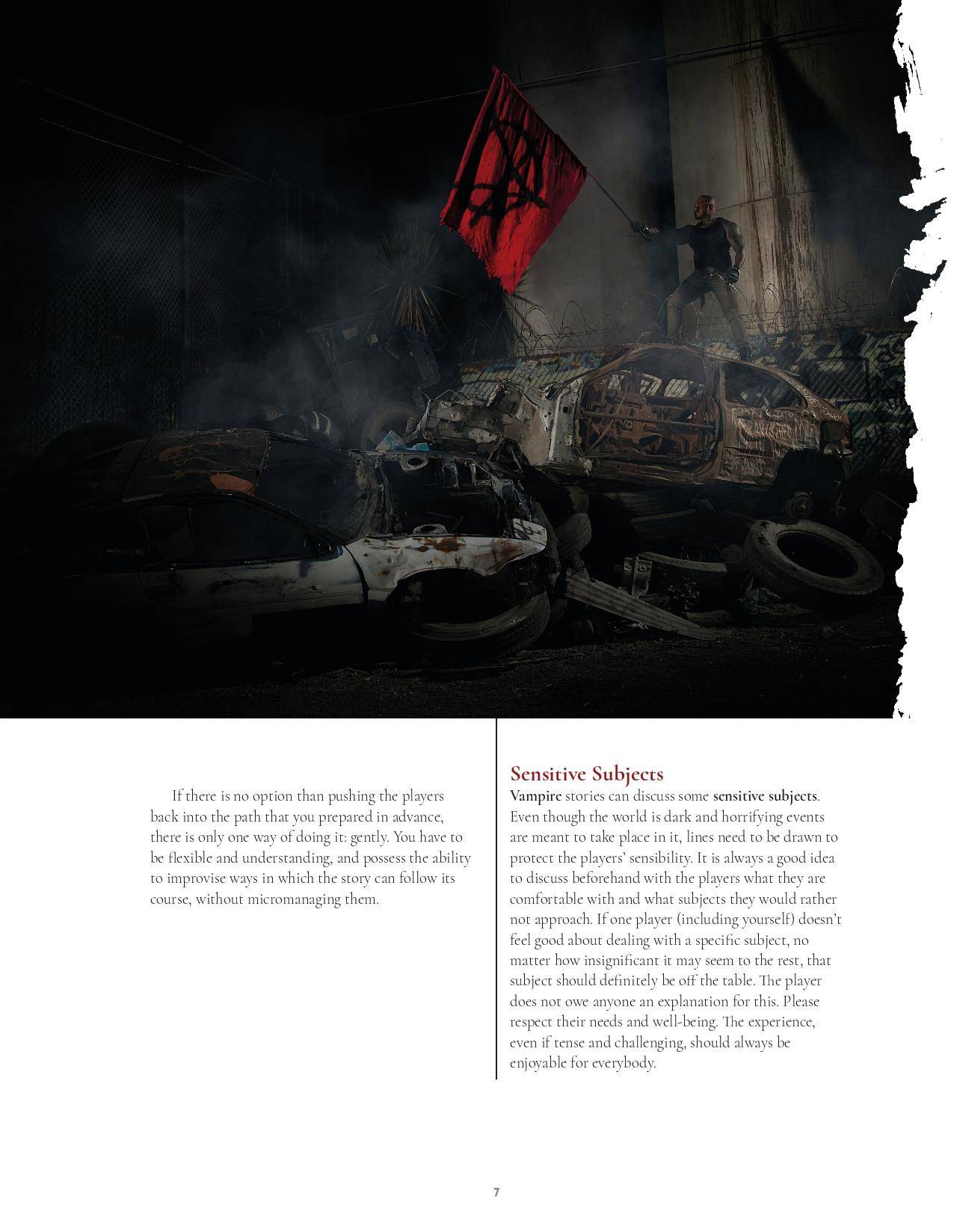 This is where Vampire: The Masquerade – New Blood Introductory Chronicle comes into play. A whole set up for new players, including pre-generated characters. The story takes place in an anonymous city, so every group can tailor it to their hometowns, if they like that idea. The pack comes with a simplified version of the rules, which will make the first few sessions fast and dynamic, while the players get used to the inner workings of the 5th edition. There are four sets of cards included; three for hunting, and another one with Second Inquisition hunters, so any confrontation can be resolved quickly and cleanly. Additionally, New Blood includes a lore and rules reference guide, which can be used in any Vampire: The Masquerade session to refresh the rules at any point, without the hassle of having to flip through the whole 5th edition book. 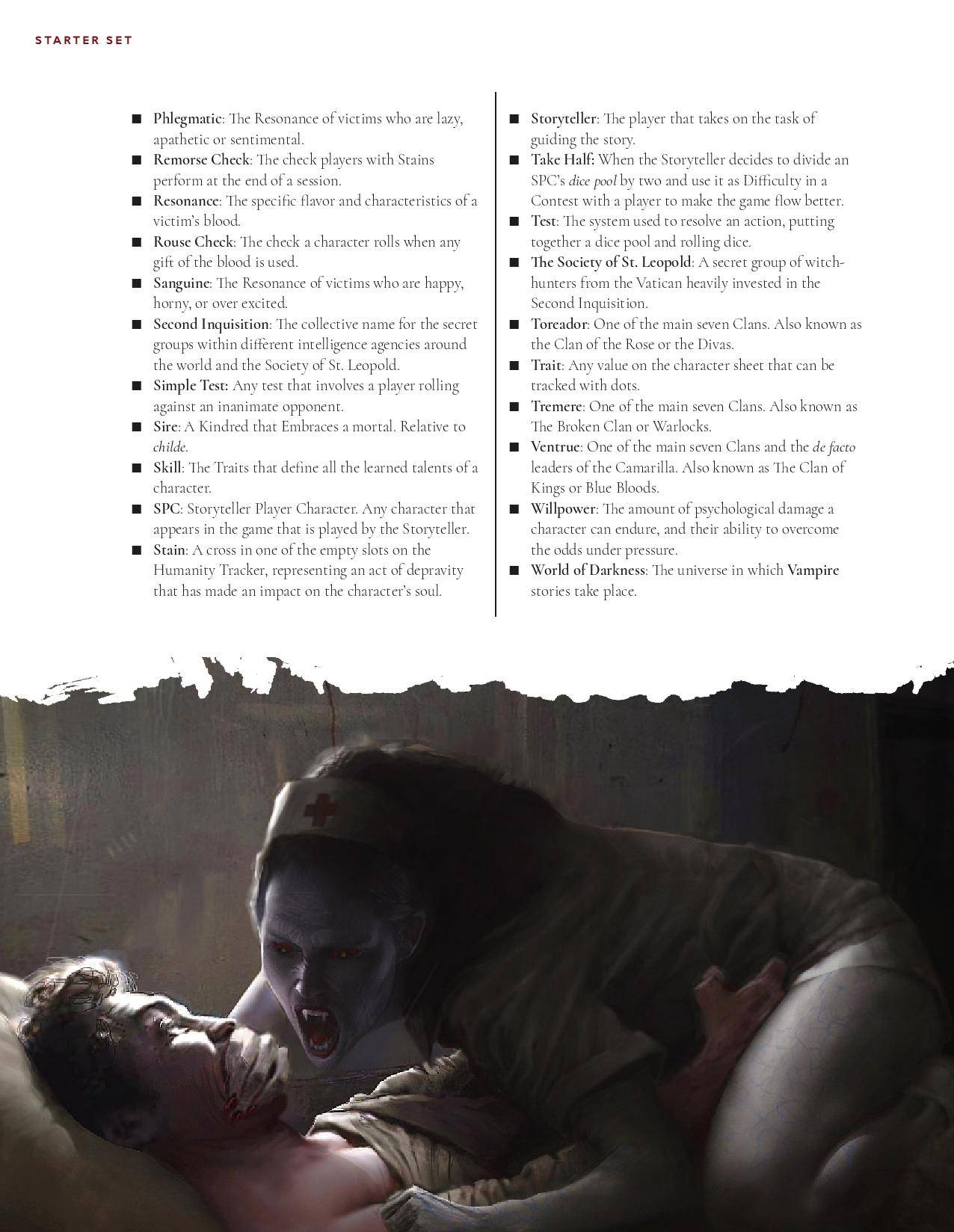 The story focuses on the first nights of a group of recently embraced Kinded. They have no allegiance, nor memory of their Embraces. They are barely aware of their own nature as creatures of the night. They have to quickly learn the ropes, or die trying. To make their situation even worse, the Second Inquisition is around the corner, always one step behind them. As their first night goes on, they learn of their new nature, of the Anarchs and the Camarilla, their sires, and of all the people who will try to use them to their own advantage. Memories slowly and painfully come back to them, telling them who they really are.

One of the things that I find the most captivating about this pack are the characters. They are well defined, but have plenty of room for the players to make them their own. However, they stray away from the traditional archetypes of each clan, exploring new narrative avenues. 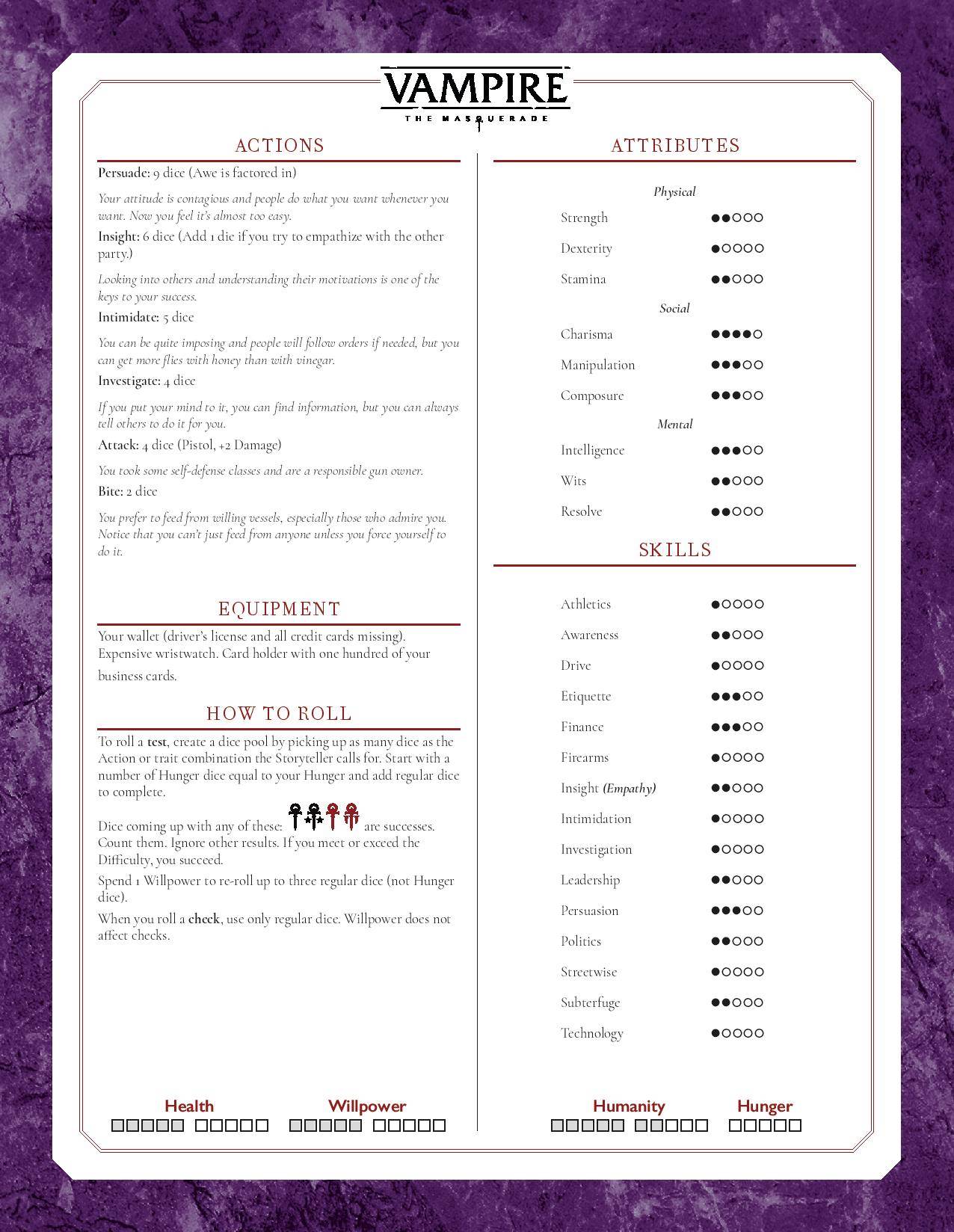 New Blood is perfect for new players, but it still brings a lot of value for veterans. The simplified rules make the mechanical parts of the game fast and unobtrusive, allowing the focus to remain on the narrative side. The cards are a wonderful resource for any Storyteller. The reference works as a crash course in the rules and basic lore of Vampire: The Masquerade. Above all of that, New Blood is a fantastic starting point for a Chronicle, where the main players in a city are defined, alliances are forged, mysteries established, rivals are outlined, and the group is left with the freedom to choose how the story will be shaped as the sessions go by.