Just over a couple of weeks back (it feels like a few days...) we were holed up in the madness of Essen Spiel, a gigantic tabletop gaming event in Germany. Every year we host a free community event and show off some sneak peaks of what's to come. Over on the right there's some of the reveals.

First up are some unit cards - the Deathclaw card, Sole Survivor (from the starter box) and a Super Mutant card. You can see we're following a used retro feel with these to fit the Fallout universe. A quick overview: top left you have the movement icons showing normal movement distances per move action (yellow in both cases) or the faster charge distance (green in both cases).

Skill icons are placed next to each relevant SPECIAL stat and where a distance is involved it is colour coded so you know which measuring stick to use (and noted with black corners which colour this is for colour blind players). Skill icons aren't always next to the same stat. For example Sole Survivor uses the AGI stat for wounds (the heart symbol) and the INT stat for search (the magnifying glass) whilst the Super Mutant uses PER. Note also the Super Mutant can't hack (the console symbol) or Lockpick (the lock symbol). This flexibility on which stats are used by different creatures or factions helps us be more creative in representing the true abilities of the characters on the table.

Below the SPECIAL stats is the red armour box - this shows the armour ratings vs Physical, Energy and Radiation damage (we've discussed below how armour works). See how the Super Mutant is immune (the X) to radiation damage? The Deathclaw is pretty touch as well - immune to radiation and it always stops (+1) one point of Physical or Energy damage as well as the result of the Armour roll. Bottom left we have some symbols which we'll talk about in the next update.

We also unveiled a cool optional armour set - you'll see the powerful X-01 power armour suit on the right. We want to provide some cool options for having Nate or Nora on the tabletop so this set will be available in Wave 2 and comes with either the helmet or Nate and Nora's heads to swap out as you like. This is obviously a powerful armour so will come alongside more powerful creatures to challenge you as well as the new factions. As a note later in Wave 1 we plan to release a spru of weapons for those of you who like modding your miniatures.

I'm sure if you've delved deep enough in to Fallout 4 that you've come across the Mirelurk Queen (see under the X-01 armour). This beast takes some fighting and is one of the large scale critters which will be a special pre-order item in Wave 2. You're going to want to power up your crew if you want to take her on! There's a scale reference showing her next to the Behemoth to get an idea of scale. Nasty!

Lastly below we showed off a handful of these objective markers which are coming in Wave 2 - these awesome Fallout themed objectives are designed to give you some really great looking points of interest for the table. Each one has a theme - Food, Holotapes, Nuka Cola, Drugs, Tools, Grenades, Weapons, Rockets and a Synth. Personally we love the dude who ended up with his head in the toilet - literally!

We hope you enjoyed this peak in to what's to come - we're planning far ahead for support for Fallout: Wasteland Warfare and have so much to show you yet. This week we received a bulk load of production samples so we'll be getting those shown off pronto and planning the next series of videos. Stay tuned survivors! 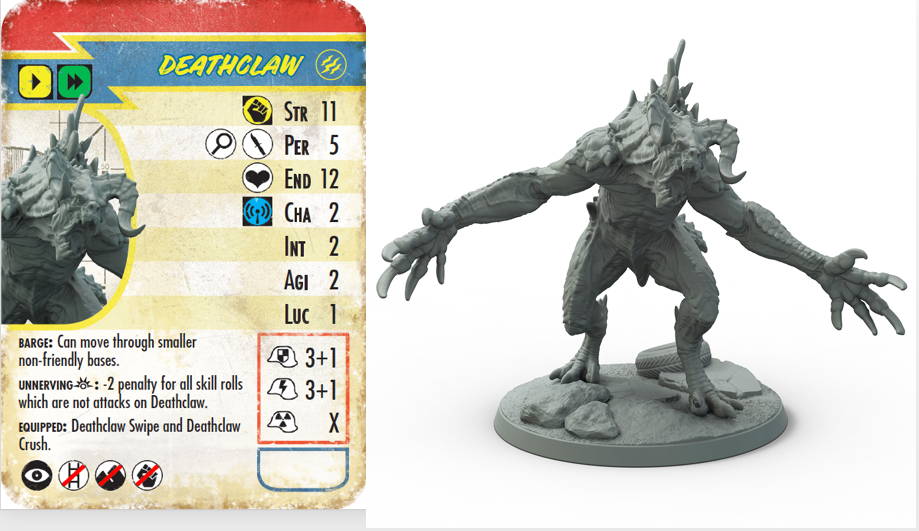 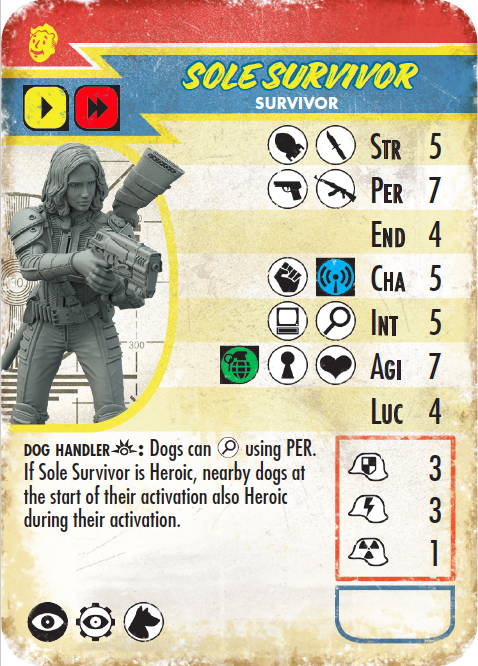 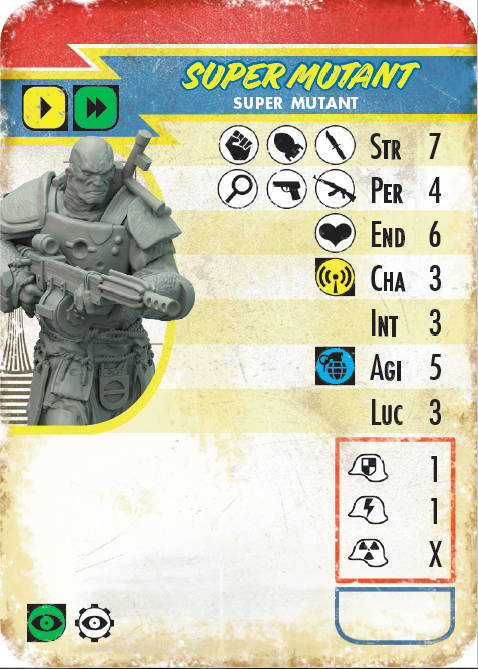 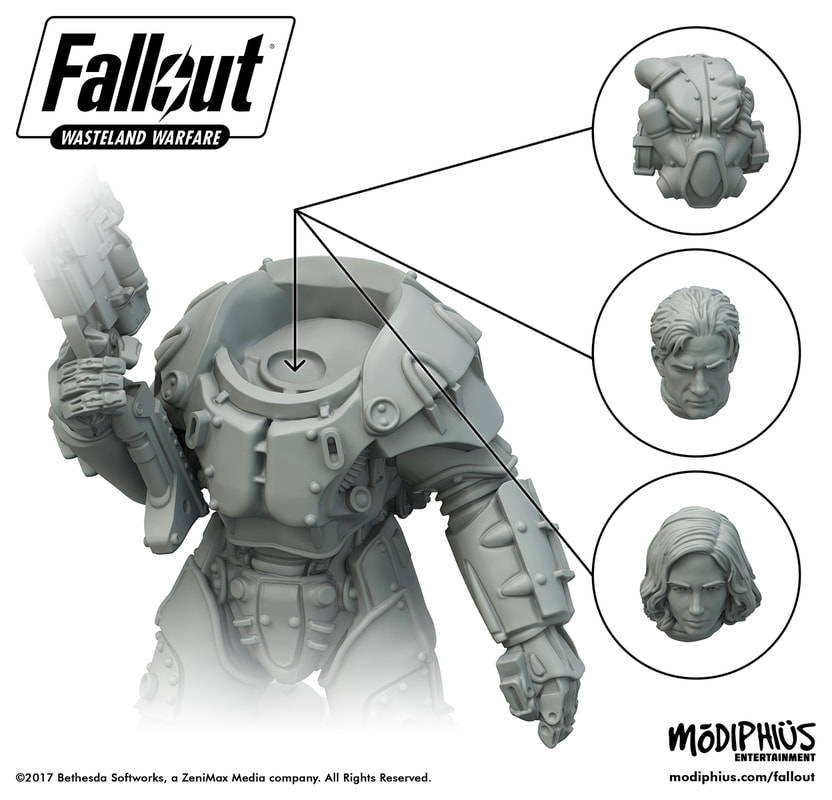 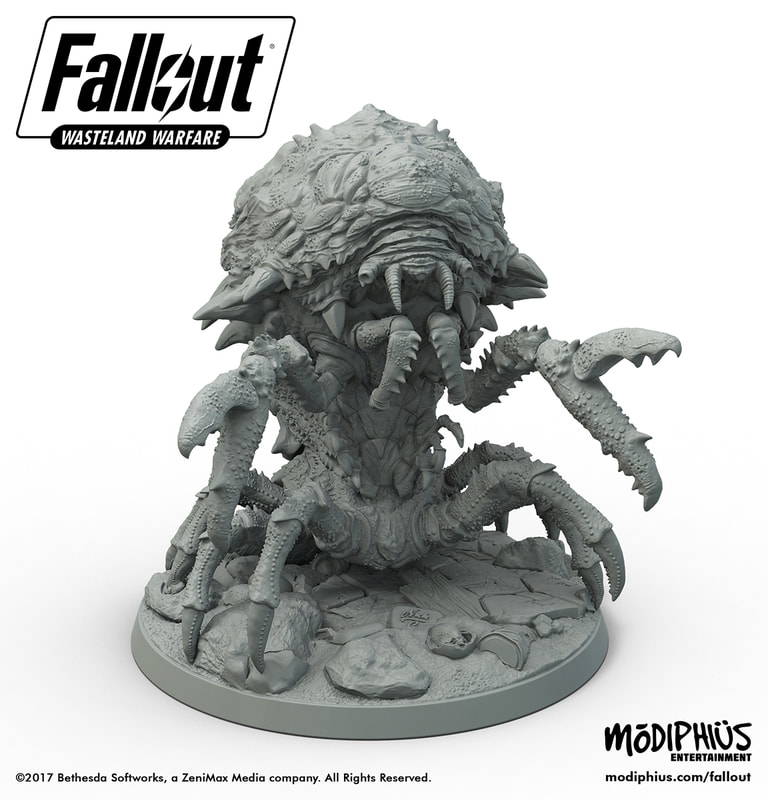 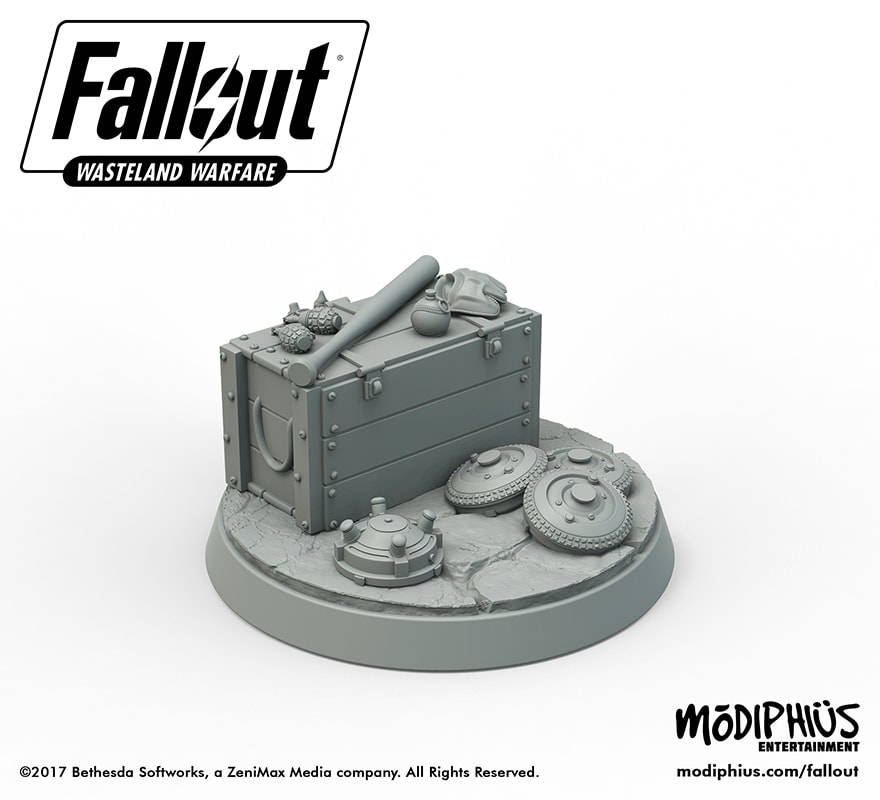 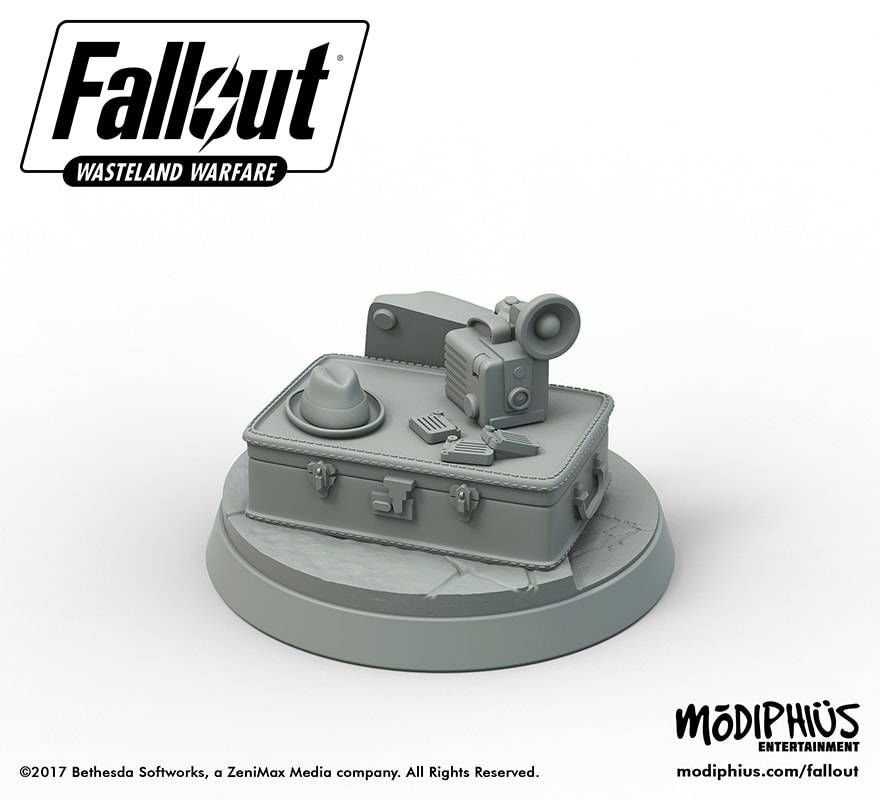 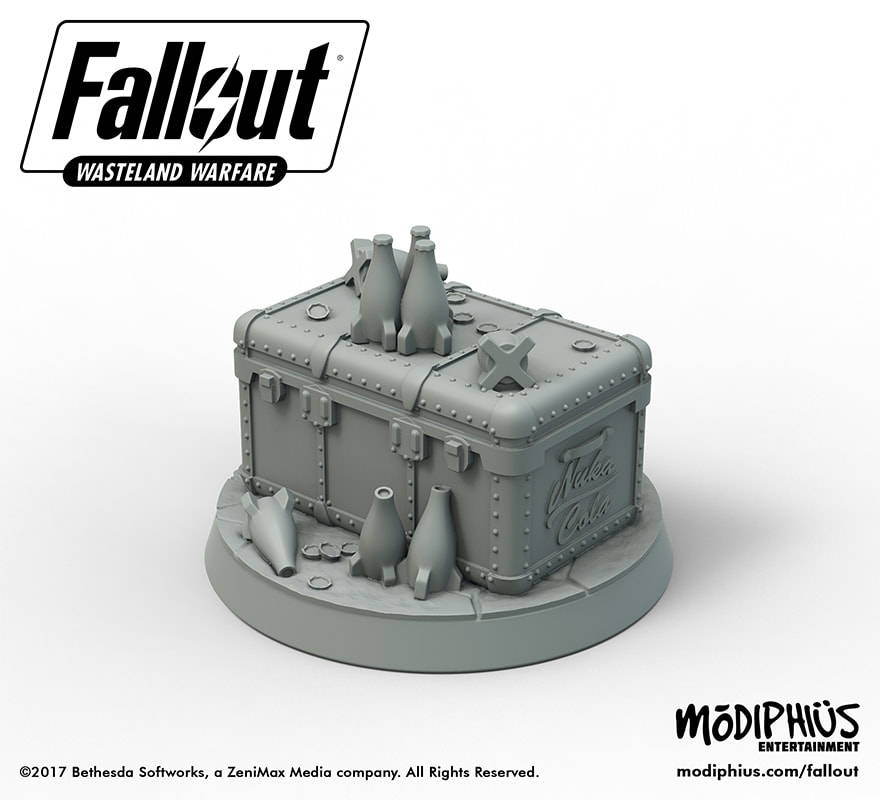 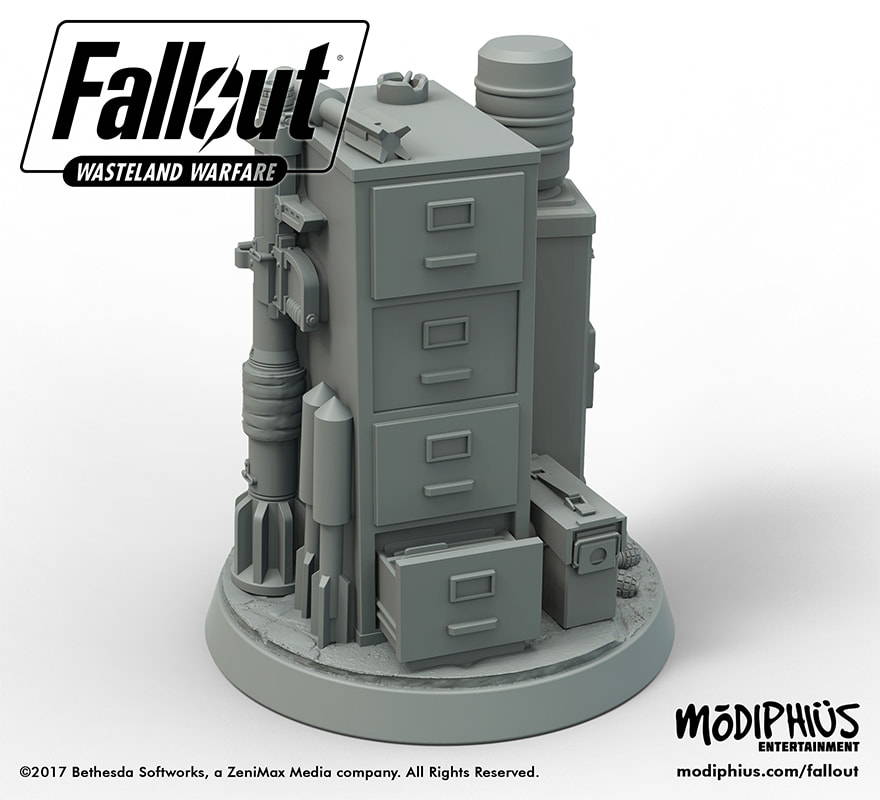 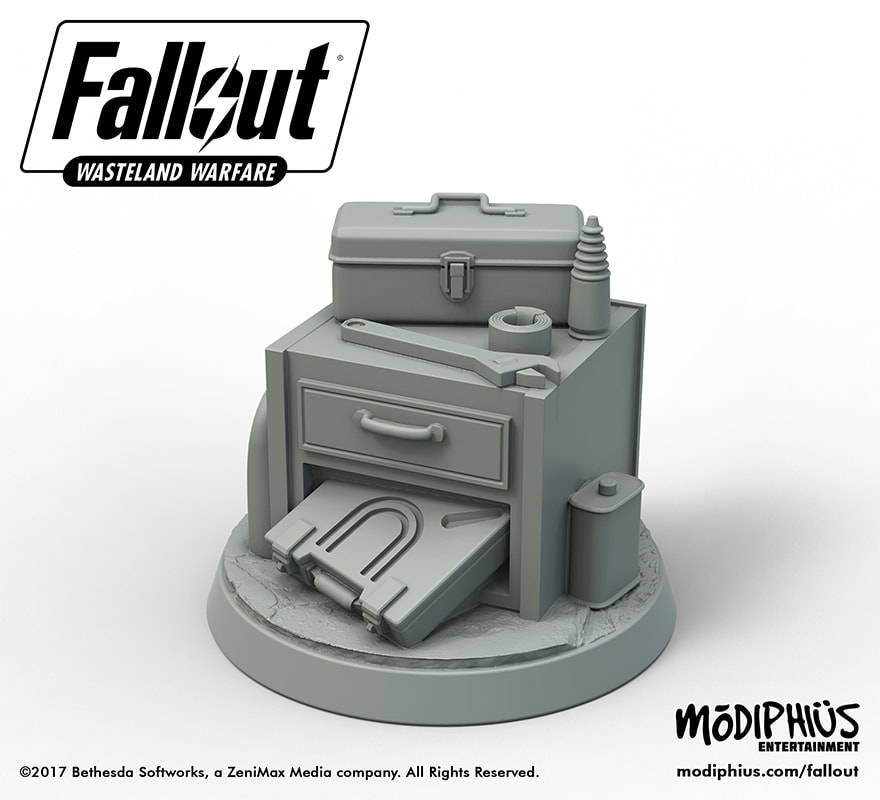 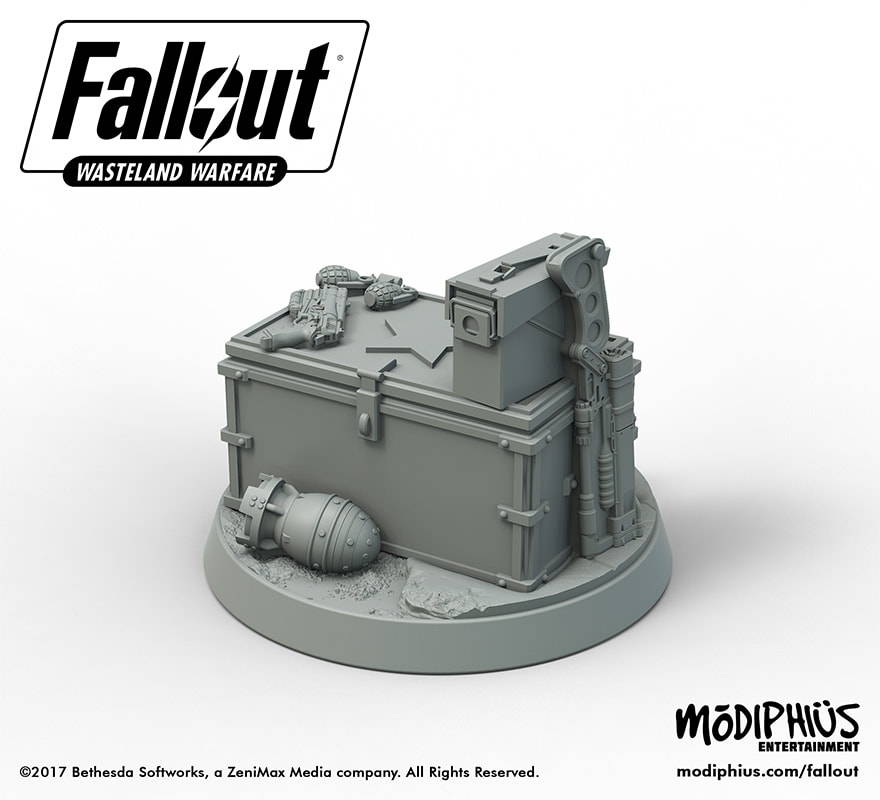