In this battle report Ethan and Giles will be playing Scenario 2 of the Institute release campaign ‘The Road Less Travelled’. Ethan has the hardy survivors lead by the Sole Survivor in T-60 Power Armor while Giles has chosen to play as the Mysterious Institute lying in wait, ready to pounce! They are using the suggested forces for the scenario as written in the campaign document.

In this scenario the Survivors must escort a trade caravan across the battlefield whilst also collecting any items they find. The Institute on the other hand have only one goal in mind, to kidnap the survivors for use in their nefarious experiments.

The battlefield is ready, a little competitive banter has been exchanged, onto the game!

You can pick up all the new Institute miniatures in this battle report now here.

Giles as the attacker was able to ready 2 of his Synths during setup, in addition to his first activation of the round he is able to move 3 Gen 1 synths towards the unsuspecting Survivors.

Ethan spends most of this round readying his models, but not activating. This allows Giles to move most of his force unopposed into the perfect position to spring his trap! 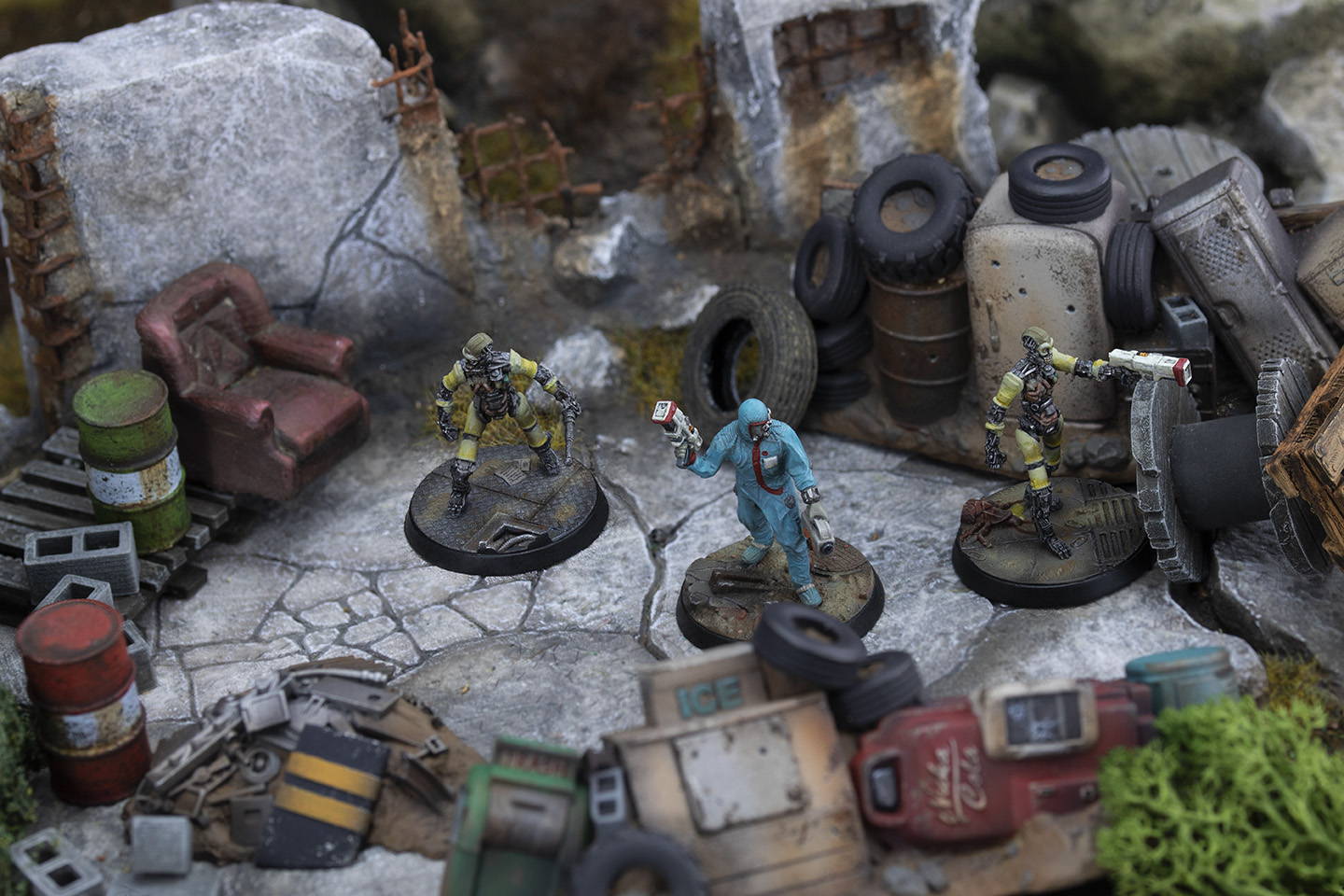 Ethan decides it's time to strike with his Sole Survivor, although maybe he wishes he’d have waited. Every shot the Sole Survivor took this turn with her Laser Rifle missed, even after flipping the Luck Token! Not all is lost though as the Sole Survivor finds herself a Baton and the Free Tech picks up a Beer.

Meanwhile Giles moves the remainder of his force in strategic positions in cover, performing Prepare actions with the units that could, ready to attack when the Survivors activate next turn.

Finally the Caravan moves along the road towards its goal.

The boot is on the other foot - it appears this turn Giles has decided to wait before activating a model. Ethan’s Settlers carefully move up the road, hugging any cover they can find whilst attempting to collect as many items as possible. One lucky settler finds themselves a Plasma Pistol! Finally before the Institute trap is sprung the Free Tech manages to deposit his Beer into the Caravan scoring Ethan some points.

Judging the time to be right, Giles activates his Courser, a Trooper and four Gen 1 Synths. The Synths begin to swarm the settlers causing enough damage for one of the Synths to attempt a Kidnap (a special action detailed in the scenarios rules). Unfortunately for Giles, the Synth fails and in return the Settler performs a Quick Action attack with its newly acquired Plasma Pistol, dealing a massive 5 damage to completely melt the Synth! 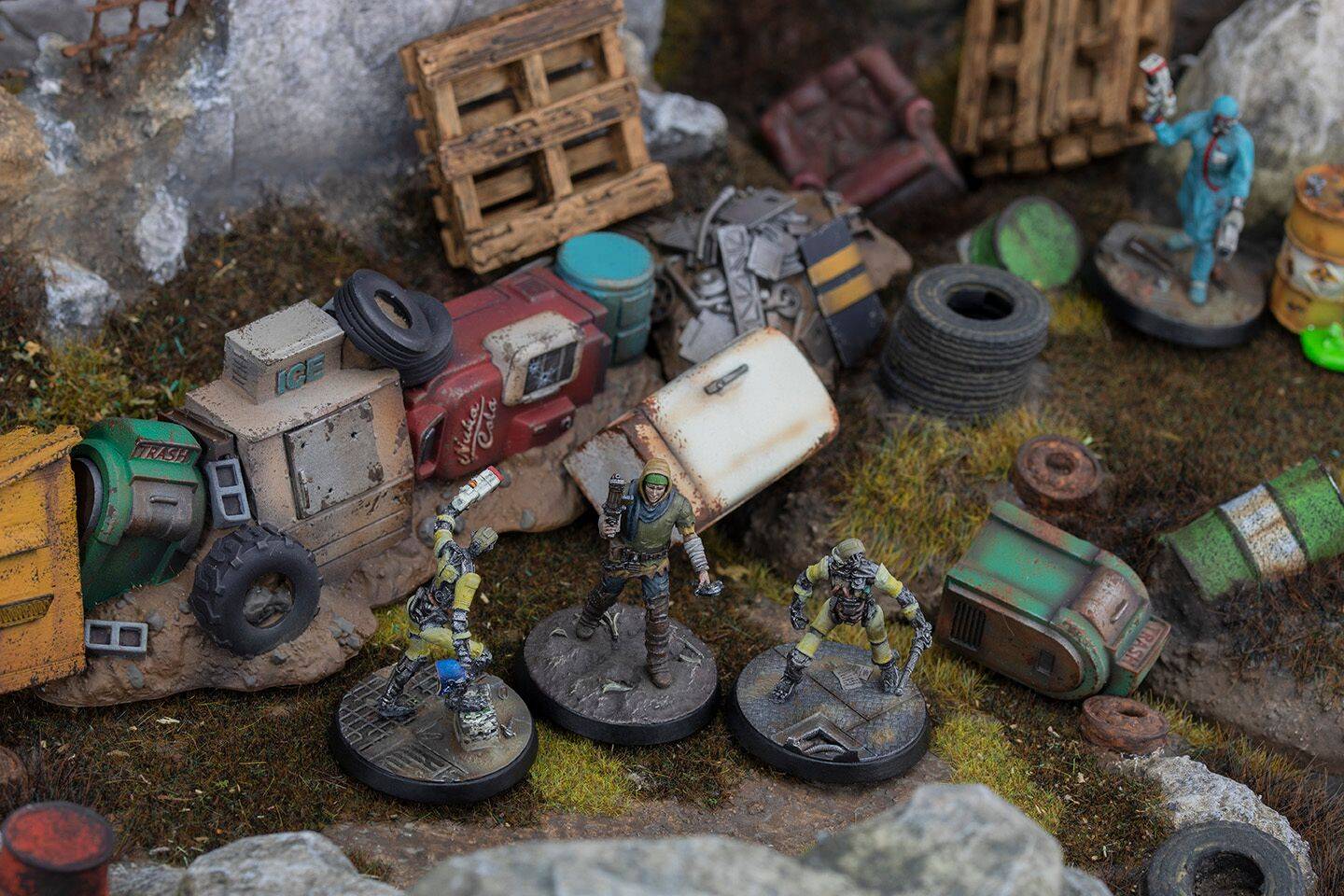 Giles (always thinking two steps ahead) moves his final Gen 1 Synth into contact with the Settler, but this time succeeds his Kidnap attempt, removing the Settler from the game. The Courser then moves into position behind the Free Tech and opens fire with its Combat Shotgun, ripping the Free Tech apart.

Finally, still under Survivor control, the Caravan moves further down the road.

Ethan’s force isn't looking too healthy at the beginning of Round 3. Having only 3 models remaining he decides to activate his Sole Survivor with the intent of causing some damage this turn. The Sole Survivor charges a nearby Gen 1 Synth, smashing into it. They cause 5 damage in one attack due to the combination of Charging, a Lead Pipe and T-60 Power Armor, utterly destroying the target. 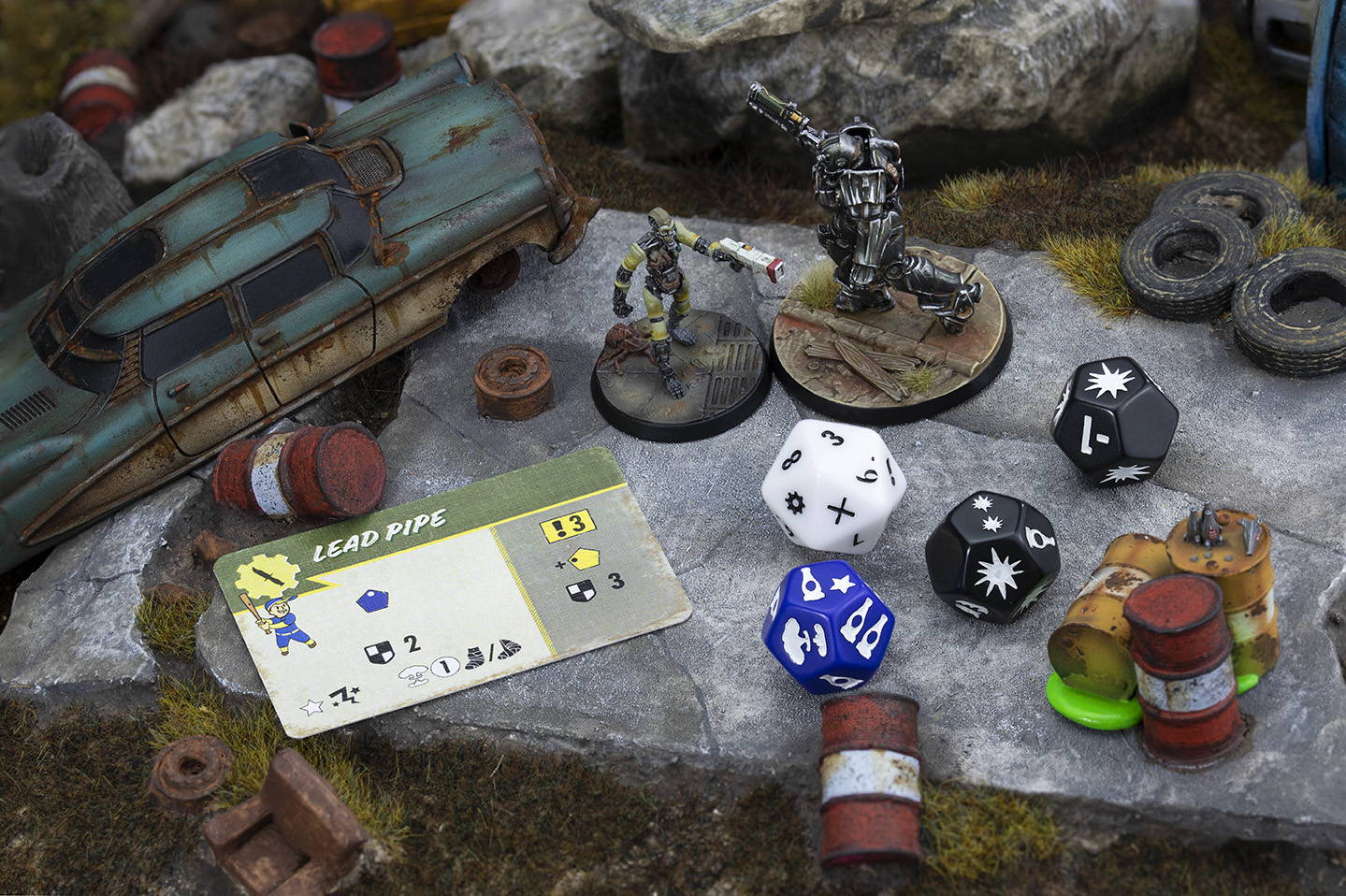 In response Giles decides to activate his Trooper, still in combat with Dogmeat, and attacks with its Institute Laser Rifle upgraded with the Powerful Mod. With a successful hit, the Trooper causes a massive 4 damage, lowering Dogmeat’s remaining Health to 2.

Giles’ careful placement of models ensures that the outnumbered Survivors are not able to move the Caravan this turn.

Things are looking bleak for the Survivors; Ethan really needs to pull something out of the bag to pull this back. However things go from bad to worse with Dogmeat attacking the Trooper only to critically fail. In response the Trooper performs an unarmed attack causing 2 damage and reducing Dogmeats health to 0, removing him from the game.

With its second action, the Trooper turns its Powerful Institute Laser Rifle toward the Sole Survivor, once again causing another 4 damage and some armour reduction. The Sole Survivor’s T-60 is now completely degraded. Could things get any worse for the Survivors? 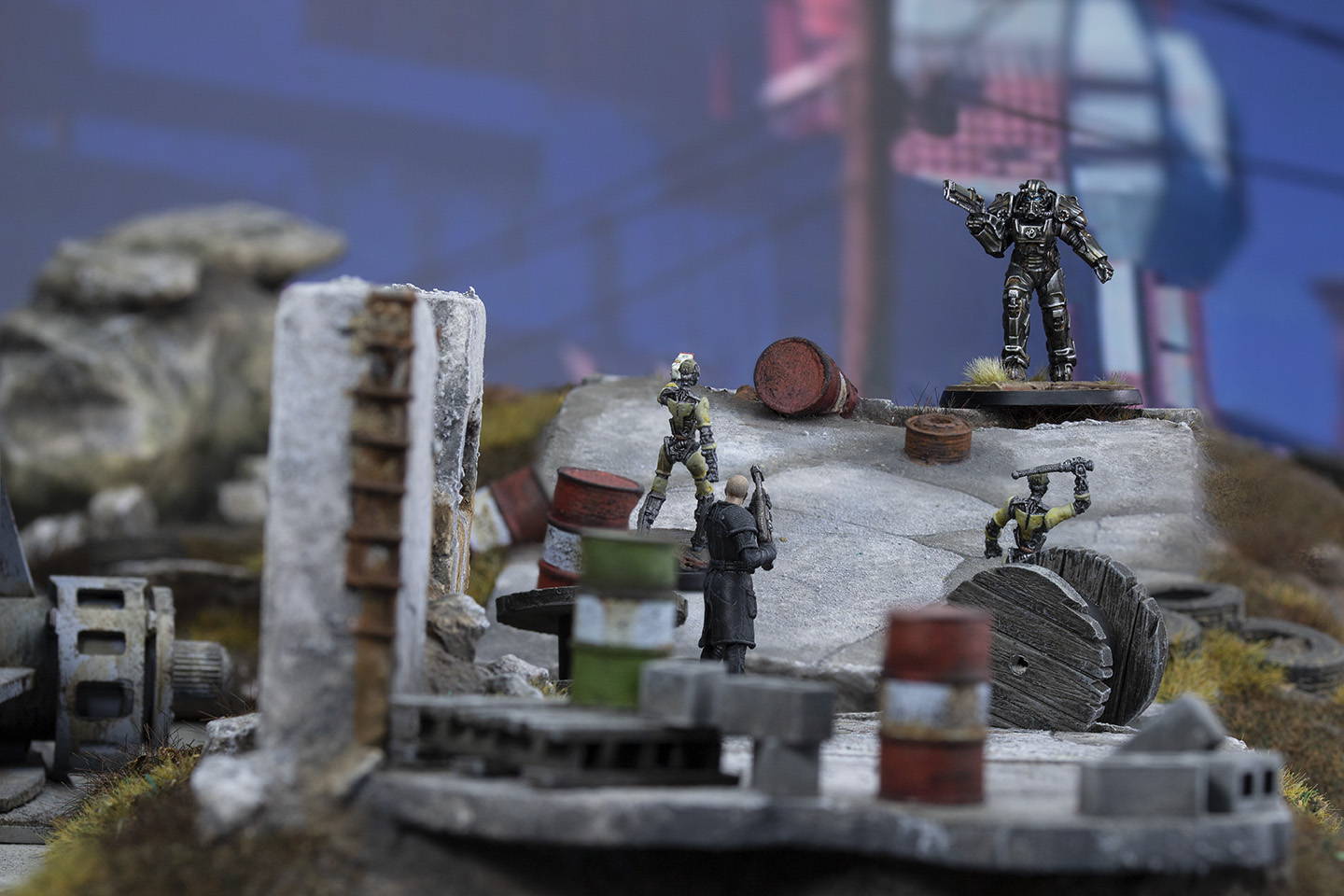 Ethan moves his Sole Survivor further down the road hoping to catch up with the Caravan but to no avail. The Gen 1 Synths catch up once again, stopping the Caravan from advancing along the road.

The bad luck streak continues for the Survivors this turn as they even lose their last Settler from a lucky shot from the Institute Scientist. This leaves the Sole Survivor to fight alone against the might of the Institute.

Giles throws as much as he can at the Sole Survivor this turn, with several attacks and kidnap attempts from the Gen 1 Synths all fail. Giles’ last activation of the round is his Courser, who throws a Synth Relay Grenade within proximity of the Sole Survivor. Activating immediately the newly arrived Gen 1 Synth moves into contact with the Sole Survivor and attempts a very vital Kidnap. 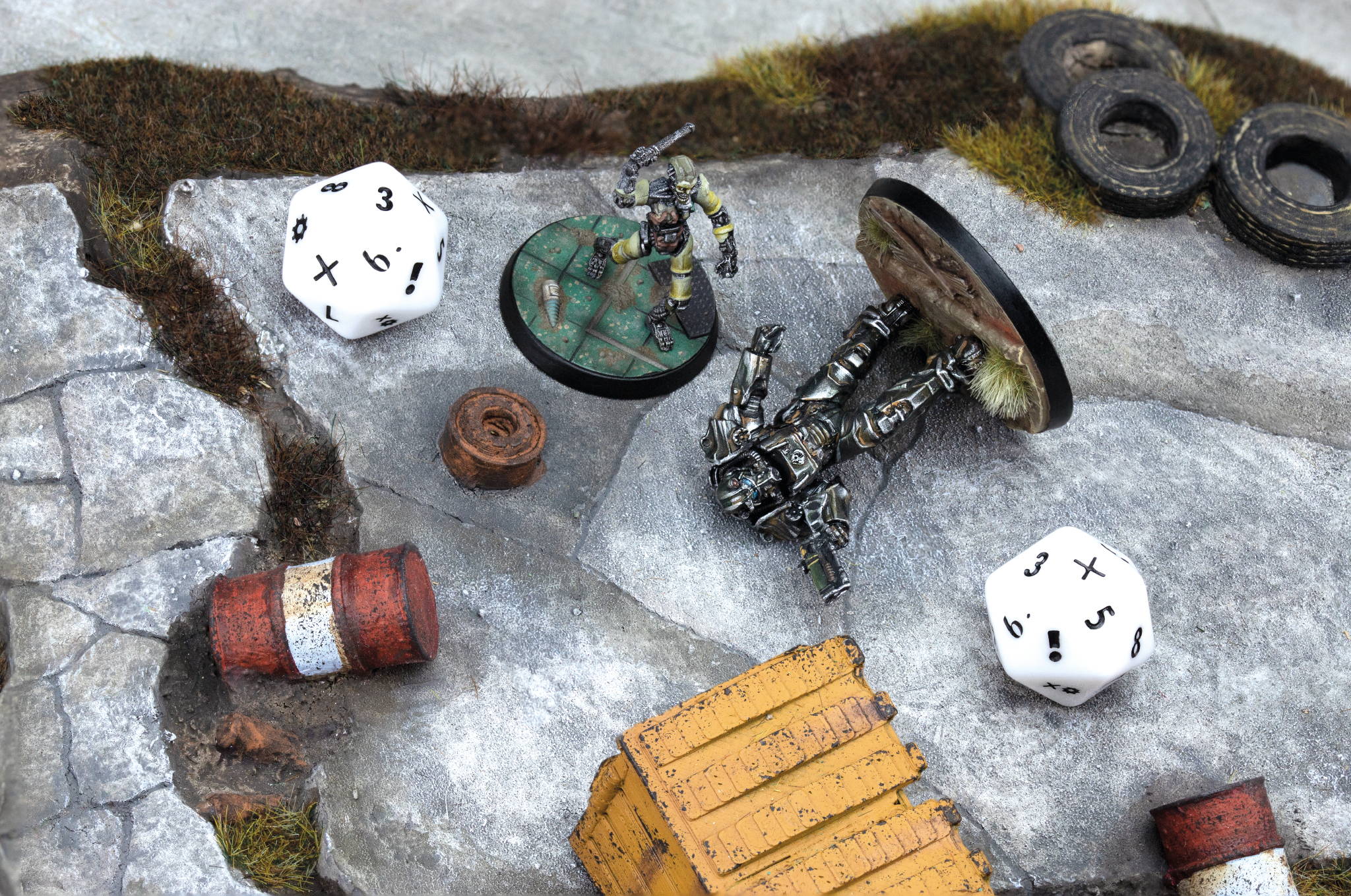 Ethan rolls an X, Sealing the fate of the Sole Survivor as she is kidnapped from the now quiet battlefield.

The Institute has won!

As all good wargamers do at the end of an enjoyable battle, Ethan and Giles shake hands and commend each other on a good game.